Please press the ♥ even if you don't plan on playing the Deck just to give it some visibility for new players, and sorry for the English mistakes, I am not native, but I am trying my best :) 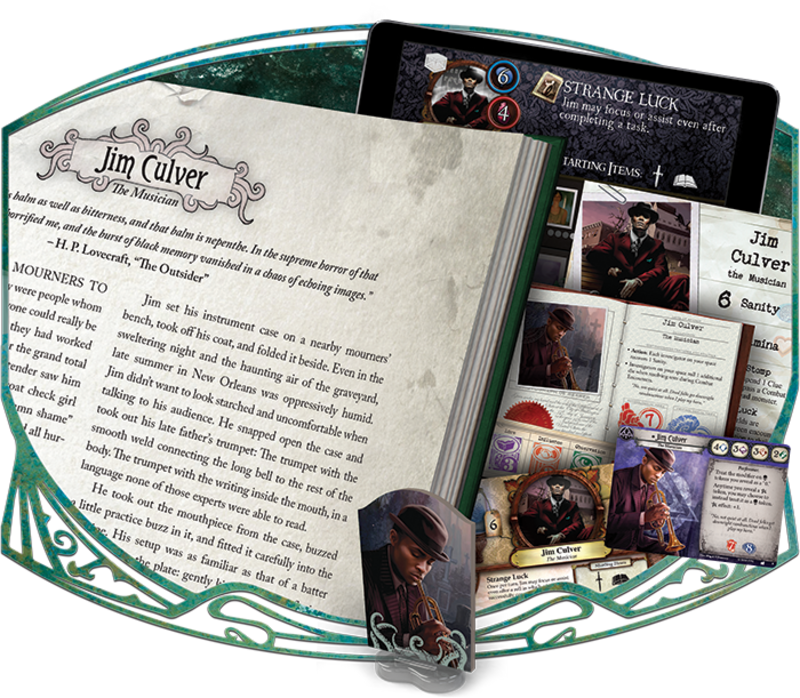 Edit 13/04/22: The Charisma should not be here in the starting Deck, so please do not take it with you unless you are willing to start with In the Thick of It.

Edit 17/04/22: Using Enchanted Bow with True Magick actually uses your 2 Hand Slots, discarding whatever is in your hands at that same moment (Flashlight and Grotesque Statue)... Sad :(

This Deck is part of a series of Decks created for the release of the Revised The Dunwich Legacy Campaign. Find the other Beginner Deck Guides for the other investigators here:

Pete and the Underdog

If you do not own The Edge of the Earth, an alternative only using the Revised Core and The Dunwich Legacy is available at the bottom in "Make your own Deck!"

Jim is a unique investigator, by his base stat that is arguably one of the least interesting in the game (not 5 to be a good Mystic, not any other 4 to make him a good flex...), and his ability to turn tokens into 0, which can be a little bit underwhelming.

While being considered being part of the worst investigator in the game, he is also one of the most interesting to build decks for, as the "5 lvl 0 cards of any faction" is an open door to tons of themed decks that would play around 5 of these splash cards.

Limiting ourselves to the newly released campaigns, Revised, The Edge of the Earth and The Dunwich Legacy, we will try to show how to make Jim a good flex mystic that can help find clues and fight enemies at a decent speed.

Take your Trumpets and let's go!

• Make your own Deck!

• During the early Campaign, find Clues and fight enemies with your basic Spells: Rite of Seeking and Shrivelling.

• Manipulate the Chaos Bag to increase your chances of success with Grotesque Statue that you can scavenge, and Nkosi Mabati to turn every symbol token into a and negate their modifier.

• Use True Magick and keep most of your Spells in your hand to gain versatility and efficiency.

• The special ability of Jim Culver is to turn the modifier tokens into 0. While the is often the milder Symbol token in the bag, at least when it comes to side effects, it can sometimes also be the harsher modifier when it is based on another part of the scenario (number of the Agenda for example). Turning these into 0s, knowing that there are usually 2 of them, often increases your chances of success significantly.

• The first way to find more is to make more tokens "act" like . Nkosi Mabati allows you to choose as your sigil and turn every other one in . This is amazing to cancel all the effects and modifiers of Symbol Tokens all at once.

• With Nkosi Mabati out in Easy/Standard, it means that roughly HALF of the Chaos Bag is 0, +1 or (in the starting bag of TDL Standard, 7 out of 15 Chaos Tokens would be 0 or better).

•• As mentioned earlier is considered the mildest Symbol Token, therefore it means that Nkosi Mabati turns most of the worst tokens in the bag into a . This is especially good in Hard/Expert where the symbol tokens are punishing even if you succeed.

• Grotesque Statue is an excellent way to have a better outcome in your tests. As half of the bag is 0 or more, you can reliably think that you will succeed in any test started at +2 or more with the Statue.

•• The Grotesque Statue decreases your chance to end your turn/give you Horror while using Rite of Seeking/Shrivelling by choosing a Chaos Token without a Symbol.

•• If you are willing to proxy some cards, then Olive McBride is a game-changer for this Deck. Add Recall the Future to name always the worst Chaos Token of the bag, and you are now sure to succeed by testing anything at +2 while using Grotesque Statue.

This Deck evolves into True Magick as you gain Experience.

• Research Librarian is the best way to rapidly find your book. Arcane Initiate is here to fish for your 1 copy of each of your valuable Spells once you have the True Magick tome on the table.

• Once in play, True Magick allows you to play the following Spells that you must keep in your hand:

•• Blur to evade and gain an additional action if you succeed.

•• Enchanted Bow as it Exhausts and does not use a charge if you are at the enemy's location. Therefore you can shoot with it, exhaust True Magick and then use the Charge on another Spell.

•• Rite of Seeking to save the 4 resources and use them more than 3 times (though no more than once per turn...).

•• Shrivelling in complement with Enchanted Bow to deal 4 damages in 2 actions. The Ornate Bow is more a panic button as using it with True Magick actually uses your 2 Hand Slots, discarding whatever is in your hands at that same moment such as your Flashlight and Grotesque Statue). You can still scavenge them later but that's rather impactful.

•• As you can Attack twice in a turn with the Enchanted Bow and Shrivelling and we have an extra Arcane Slot available, we use it for Divination to be able to also investigate at least twice per turn.

Note: You cannot use True Magick on Divination and decide to spend multiple charges as True Magick only has 1 at a time (unless you manually add charges to it), so it does not synergise well, and this is why we are only playing Divination as a normal Spell.

• Jury-Rig can be applied to the True Magick to boost the tests performed while copying a Spell.

Jim Culver has a decent 3 , so it is possible to consider him as a standard clue getter at the beginning of the Campaign, with a bit of help:

• Flashlight gives free clues on 2 or fewer shroud locations. As they have 3 supplies, they are a great recipient for Jury-Rig before you purchase True Magick. You can also Scavenge empty flashlights to always have them available. With Nkosi Mabati by your side, you should be almost sure to succeed in any test on a 3 shroud location without committing any other card.

• Unexpected Courage and Perception are also good ways to boost Investigation tests for 4 shroud locations or more, and Perception replaces itself, making it faster for you to find your better cards.

• Scavenging works while doing a Basic Investigation as well as using Rite of Seeking or Divination. Any success by 2 or more brings you back 1 Item.

• Early in the Campaign, Flashlight is an excellent target as you can play them repeatedly.

• Jim's Trumpet can be committed to Skill Tests for and scavenged during successful investigations.

• The real reason for playing Scavenging is later, though, after we upgrade to the Grotesque Statue. It discards itself when empty, which is perfect as you can get it back right after.

Note: As the Grotesque Statue is discarded after the last charge is spent (Step 3 of a Test), you can Scavenge it during the same investigation (Step 6 of a Test).

• Ritual Candles is great to mitigate the Symbol Tokens before Nkosi Mabati arrives.

• Drawn to the Flame is also a good way to speed up Clue Getting or find clues at high shroud locations, and you are not necessarily scared of Encounter Cards with your stats and that many Skill Cards.

• Emergency Cache is the best economy card available to mystics at this point.

• Holy Rosary to boost your and soak Shrivelling's effects and Ward of Protection.

• Ward of Protection is a stapler to prevent yourself from bad Encounter Cards such as Ancient Evils and also works while using Drawn to the Flame.

• All the Skill cards are here because they are replacing themselves and therefore make your better cards accessible faster. Overpower is mainly here for Uneven Health Enemies to not burn a Shrivelling Charge for 1 damage needed.

Link to the Full xp Deck

•• Nkosi is your best way to succeed at almost every test. Note that he can also help another investigator at your location if you don't need him.

•• Investigating is the best way to accelerate the game, more investigating Spells means more chances to help win the game.

•• It is fine to upgrade them 1 by 1 as Research Librarian finds them relatively reliably. From there, you will get more Spells to unleash your true potential.

•• When True Magick is on the table, Enchanted Bow allows you to attack twice per turn, one attack exhausting, the other using a Charge.

•• Evading is an efficient manner to get rid of certain enemies while getting your action back.

•• To make the best out of your Scavenging and significantly increase your chances of success. It is also possible to do this upgrade before True Magick if you are playing Hard/Expert.

•• You should not have that much Experience in TDL, but if you need more reliability at one point, this could help but would most likely deprive you of Grotesque Statue, for example.

•• If you want to deal with 5 enemies per turn while pairing with Enchanted Bow.

Make your own Deck!:

If you have the whole collection, have fun with this Chaos Mitigation Jim

If you do not own the EotE Investigator box, you can use This Deck variant that uses Jewel of Aureolus to take advantage of the that you fish with the Grotesque Statue. Try to pull them while using the Flashlight to not suffer from the consequences on your main Spells.

• If you are playing this Deck with only 1 collection and multiple of my pre-made Decks: BruiZ-oey, Clue Vacuuming Rex, True Ma-Jim or Pete and the Underdog, you can distribute the cards as follow:

•• Give 1 copy of Prepared for the Worst to "Ashcan" Pete and Jenny Barnes as Zoey Samaras already has 4 weapons.

•• Give 1 Ward of Protection to Rex Murphy and 1 to Jim Culver.

•• Give 2 Scout Ahead to Zoey Samaras and upgrade Jenny Barnes with The Red Clock earlier.

•• Give 2 Bruiser to "Ashcan" Pete and go for the Cyclopean Hammer for Zoey Samaras.

•• Give Divination to Jim Culver.

Compare with another decklist