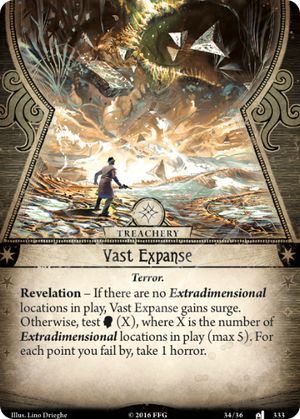 For each point you fail by, take 1 horror. Sentence quite scary since Rotting Remains first revelation. Vast Expanse can be less scary than Rotting Remains, it can be exactly like Rotting Remains but if there is a lot of extradimensional locations in play, its effect can be even worser. Autofailing (5) can end your campaign easily. My own experience. Everything was very good, all Rex needs was to survive mythos phase and resign. It never happened...

johniez · 3
That's why i run Forewarned in all low sanity characters that can get 1 lvl Seeker such as Roland or Joe Diamond to tackle all those nasty treacheries. But Rex has a lot of sanity, so, perhaps this card was overkill.... I think everything is depending from the scenario outcome. — Sotosprotos · 78 5/18/20
We just restarted TCE after daisy was defeated in first scenario. Deny Existence proved to be a live saver (or hand cards if you auto fail diabolic voices) on the second run. — Django · 4146 5/18/20
I meant TCU — Django · 4146 5/18/20
@johniez I had the same result. Rita only needed 1 more clue to resign but I drew this during the Mythos phase and pulled the auto-fail. — DrMChristopher · 129 4/4/21