I am writing this fresh off of deck-building, running across a combo that makes this item far more viable than it might initially seem: Forced Learning.

This card, along with some other Survivor cards, suffers from only being useful when it is in your discard pile, which it is hard to get it into efficiently when not playing Wendy or Ashcan Pete. Having this in your hand means you have a dead card, and more often than not it'll be stuck there for a while.

Forced Learning solves this issue. Now, every upkeep, you get to put a card into your discard pile from your hand, without losing card advantage in the process! And the obvious beneficiary of this combo is Darrell Simmons, who may appreciate extra health soak in some campaigns due to his 6 base health (hello TFA), and also loves to have Winging it in his discard for more efficient clue-gathering. Plus, he can run Scavenging shenanigans as well due to his high base Intellect and tendency to lower difficulty naturally, which also synergizes with Forced Learning.

I'm excited for this, and I may have to update my review if it does not work out the way I'm expecting it to right now.

Looking at it again, maybe I should've put this review on Darrell Simmons, it seems quite specific. Although, Minh Thi Phan can also use all the cards mentioned.

Shandras · 2
Forced learning only allows you to discard one of the cards you draw with it, not any other you might have in your hand — Django · 4427 2/2/23
True, overlooked that in my first rush of enthusiasm. Still seems to work OK for the most part, the anti-synergy with extra draw is about the only concern I have. I'll try it out some more. — Shandras · 2 2/3/23
Maybe we'll get a level 1 shield with a '?' icon someday? That's about the only thing that would make me even consider playing it. I mean, even then it would be worse Leather Coat (hand slots are far more valuable than body slots) but then you could at least get it into play without relying on a secondary discard effect. — olahren · 2490 2/3/23
Unlikely, olahren. Improvised cards are meant to need ways to get them into the discard pile. Which isn't that hard in survivor anyway. Wendy, Duke and (to a lesser degree) Patrice have it build into their ability, and there are cards like Cornered and "Short Supply", that can help. I agree, though, that the hand slot is in most decks too expensive for this card. — Susumu · 271 2/3/23
I think these cards are meant to enable stuff that discards, not the other way around - most of the time, you wouldn't consider Forced Learning because it dilutes your deck too much to make up for the powerful filtering effect, not to mention the horrendous interaction with weaknesses. With cards like this though, you can add more power to that to potentially make it worth your while. I do agree this is not the most powerful card of the bunch, but in that context, it's more playable than I (and probably most people) gave it credit for. — Shandras · 2 2/3/23 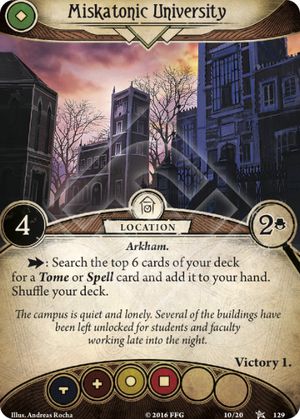 If you take the action, do you have to take a tome? For example, if I am playing Daisy and the Necronomicon is my only spell in the top 6, do I have to draw it? The wording is a bit confusing.

thegarbageman25 · 39
I want to encourage you that this is the review section and there are other good question locations such as BGG, reddit, FFG, or mythos bustor discord. For the question, it is your choice "whether you trigger the ability or not", but if you are choose to trigger the ability, you should resolve the effect as much as possible unless the effect is stated with "may." In this case, you should draw Necronomicon. — elkeinkrad · 407 2/2/23
In fact, this question is one of the famous question and you can check the answer at the FAQ in the [Arcane Initiate](https://arkhamdb.com/card/01063) with Dark Memory. — elkeinkrad · 407 2/2/23

Limited applications, but say Darrell Simmons fails a skills test on a Seeker Asset by 2. Granny Orne intercedes and he’s down only one. He immediately triggers the reaction on his Lab Coat to pass by zero. Could be worth the setup if you’re already recurring Fingerprint Kit, on a higher difficulty, for example.

PJFrigate · 32
How about Granny Orne (0), instead of Granny Orne (3)? With Granny Orne (0), regardless of the value of token except auto-fail currently arguable ruling, the test can be succeed by 0 whenever the difficulty of the test is equal or less than 2. — elkeinkrad · 407 2/2/23

A sequel to all the fight/evade reduction cards for Exploit Weakness, lets do the same for Shed a Light:

This card is the best for Patrice Hathaway and makes her nearly invincible since she always gets "heal" back at 5 cards during upkeep phase. Moreover, this card can help her utilize useless cards in her hand every round.

Also, if you don't want to deal with Watcher from Another Dimension and are happy with 4 cards each round then Idol of Xanatos can be extremely helpful.

rongcond · 15
You’d have to be in dire straits to be taking that much damage a round. And the moon gem which can be played for zero actions is an even better pick. — MrGoldbee · 1314 1/31/23