장소
This gateway serves as an entrance to the Grand Rue during high tide, when a boat is the only means of reaching the city. 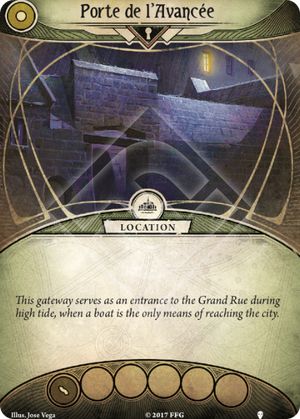 : Move 1 doom from one agenda deck to the other. Then, place 2 clues on Porte de l'Avancée (from the token bank). 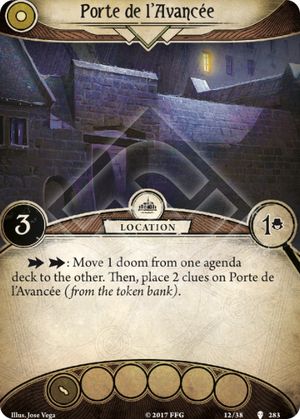 The only question that this card needs to address is the situation in which (spoilers: After reaching to Act 3 and Agenda 3, how do you activate this ability?). The text reads to Move 1 doom from one agenda to the other, but if the second agenda does not exist, how can you use this ability, see "Then" keyword in rules reference. It is possible for you to never enter an additional location by spending the requisite clues if you cannot use this ability later on in the game. This card may need to be errata otherwise you will never be able to receive the necessary amount of clues to advance the act deck.

Arthdrew · 1
Hmmmm, I'm not sure that's right? The only location that requires clues to enter requires 3x (the number of players) clues and the locations in play at the start should have a minimum of 4 x (the number of players) between them. So you shouldn't ever *need* this ability to progress, I don't think. — bee123 · 24 7/27/20
Yeah, I'm not sure where there is an issue. There is one location that requires clues to enter. Otherwise all acts/etc. care about locations having no clues on them rather than the investigators spending clues. And once you reveal an Act, there isn't much value in using clues to advance the other Agenda, now is there? — Death by Chocolate · 796 7/28/20
You might "need" this ability to progress, if you spend the starting clues on advancing an agenda so far that it becomes an act, without revealing that one location. To which the fix is Don't Do That. — Yenreb · 15 8/13/20