Revelation - Put Entombed into play in your threat area.

You cannot disengage from enemies or move.

: Test (4) to escape the tomb or (4) to break out. If you succeed, discard Entombed. If you fail, reduce the difficulty of this test by 1 until the end of the round. 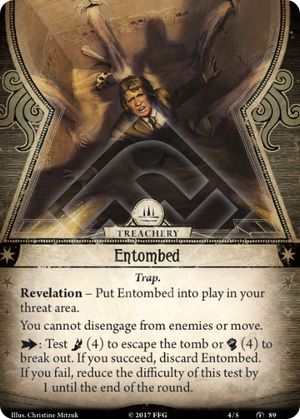 So, a lot of people have figured out that you can use this to evade the Harbinger multiple times in one turn without having to re-engage it (especially good with someone like Rita Young who would be better at evading it than fighting it). Well, I have an even more janky proposition for you:

Suppose that you're engaged with enemies and you have Entombed in your threat area. You provoke an AoO (or get damaged through some other means), it would defeat you except that you have Cheat Death in your hand, so you play that. Normally, the first step of Cheat Death is that you disengage from each enemy engaged with you, but Entombed prevents this from happening so you go to the next step, discard all cards in your threat area. This includes both Entombed itself, and the enemies that you are engaged with.

But wait, it gets better...

Because Cheat Death is not expecting to discard enemies at all it has no text preventing it from discarding Elite enemies. This means that if you have the Harbinger of Valusia engaged with you, you simply discard her from play; Achievement unlocked.

But it gets even better...

Normally, in the resolution to The Doom of Eztli, if you haven't defeated the Harbinger, you would record that she is still alive, which means that she comes back in future scenarios, however the actual text of the resolution is as follows:

Something funny happened in a Forgotten Age Campaign. Because Rita Young drew this this card while engaged with Harbinger of Valusia, she was able to repeatedly evade it without re-engaging in order to give it resources and make it go away!