Revelation - Put Night Terrors into play in your threat area.

Forced - After you fail a skill test: Reveal the top 3 cards of your deck. Draw each weakness revealed this way and remove the other cards from the game. 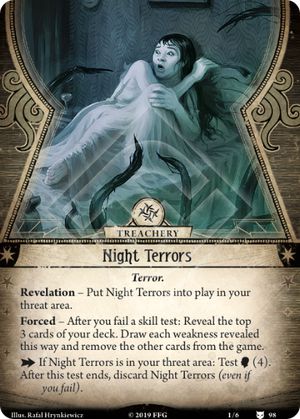 Ugh. This thing. It’s just high enough difficulty to eat your skill icons, and the effect is immensely punishing. Losing 10% of your deck is no fun, and the “draw each weakness” is just icing on the cake. Screw you, Merging Realities!

LivefromBenefitSt · 884
Is it tho? Unless you’re a heavy draw/search deck, most decks don’t hit every card in their deck during a scenario, so losing three cards is often functionally the same is those cards just being in the bottom of their deck. Take it on the nose and save your icons. — Death by Chocolate · 1105 9/27/20
Agreed with DbC, losing your deck is fundamentally not a big deal unless your deck is heavily dependent on a few cards. It's no different realistically than just having a different shuffle of your deck where those three cards ended up at the bottom- in fact, its a bit better than that since it's like you got to see those 3 cards on the bottom (ie you know not to expect them, which is helpful). It could even hit a weakness. Since getting rid of the card doesn't require that you pass the test, I say it's a bad card to commit to. Eat the action, learn a little more about your deck in the process, and then move on. — StyxTBeuford · 12690 9/27/20
Losing your cards* — StyxTBeuford · 12690 9/27/20
I should clarify that it hitting a weakness is generally a good thing, as it means you didn't waste a draw on it. — StyxTBeuford · 12690 9/27/20
Just sayin’, it always eats something important. That’s Arkham. — LivefromBenefitSt · 884 9/27/20
Sure, but so do most treacheries. Whatever cards it eats are no different than just never seeing those cards because they shuffled low. It costs 1 action, with the slight potential that the action is kind of refunded if it hits a weakness (that is in the top 3 so you most likely would've lost a draw to it), makes this an incredibly tame treachery relatively speaking. — StyxTBeuford · 12690 9/27/20
I also think it's pretty mild cause other investigators can resolve this card but don't have to discard from their deck if they fail, see rules Triggered Abilities. — crayne · 3 9/27/20
@crayne Other players can't activate it; it's not in their threat area (as per the text after the action icon). — SGPrometheus · 635 9/27/20
Maybe this is just a personal thing -- damage, horror, resources, and even polayed cards come and go, and I'm OK with it; it's nothing personal, just Arkham. For some reason, however, milling my deck just seems... rude. — LivefromBenefitSt · 884 9/27/20
Much like the autofail, it’s the kind of thing that feels much worse than it actually is. — StyxTBeuford · 12690 9/27/20
Yeah, it's a common thing with a lot of card games that milling always, *always* feels worse than it actually is, and it takes almost everyone a long time to adjust to this fact. — Thatwasademo · 42 9/28/20
The scariest thing about this card is how it combines with swarm to make you shuffle/horror more often than expected. Otherwise nbd. — Yenreb · 15 9/28/20
I think that RFG is considerably worse than milling. If you get it early enough it can get kind of dangerous (provoking frequent reshuffles that you might not be prepared for, also potentially removing allies that you could otherwise use to soak the horror), and it makes it so that you can't recur cards or cycle them back into your deck when you draw through it. In practice though, I haven't found this one to be that bad, as I've never had to have it out for enough rounds to be a problem. — Zinjanthropus · 199 9/30/20