Spend 1 ammo: Fight. If the attacked enemy is exhausted, you get +2 and deal +1 damage for this attack. 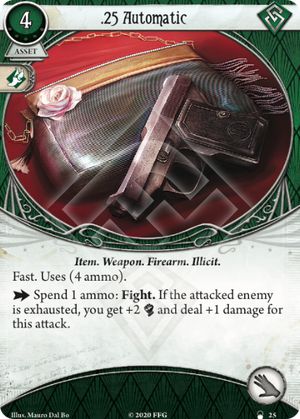 As a 4 resource-cost, 4 ammo firearm, the .25 Automatic immediately invites comparisons to its classic big brother in Guardian, the .45 Automatic, and this is a comparison that doesn't do the .25 any obvious favours. In exchange for a single additional point of accuracy on each shot over the .45, the .25 is fast, and green, and... loses both its accuracy and its damage altogether unless the target is exhausted... something that usually takes both an action and a successful test to achieve, and not even the same attribute of test that you need to successfully hit with this gun. This gun in fact does nothing at all unless the target is exhausted!

A fast, do-nothing weapon in Rogue immediately evokes the spectre of level 0 Switchblade, a card with a less than stellar track record for most of the game's history. .25 Automatic then goes on to fail to flatter itself in this comparison, too... at least Switchblade's fast ability meant that it could, potentially, help you in a situation where you could land the over-successful fight check while threatened by an enemy; .25 Automatic's fast ability is useless in this regard, since .25 Automatic will never help you fight unless you successfully evade the enemy first, and if you successfully evade the enemy then (barring weird edge cases where you're engaged with multiple enemies at once) you're at your liberty to play a non-fast weapon without fear of retaliation. Switchblade's other benefit over .25 Automatic was that it provided cheap protection against asset hate, which the Automatic doesn't really do, since 4 resources is a bit too much to pay for good Crypt Chill fodder. You might want level 0 Switchblade in Tony Morgan; you probably don't want this.

So, is .25 Automatic just a bad card that can't compete? I'd argue that it's not. I think it actually serves a niche that has existed in rogue since the game began: it's the gun that can get evasion-capable 3-Fight rogues to the place where they can shoot testing at 5, for 2 damage, without breaking the bank and while leaving them a hand free. Even the upgraded Derringer doesn't quite meet this threshold, since you're really only shooting at 4 in terms of hitting for 2 damage.

Why is testing at 5 with your investigator plus weapon so much better than testing at 4? It's hard to quantify, but from Roland with a .45, to Jenny with her Twin .45s, to Mark with his .32 Colt or Tony Morgan finally making that Switchblade sing, it seems to be something of a golden breakpoint that delineates when a basic weapon and investigator pairing starts to feel good. If you're "Skids" O'Toole, Finn Edwards, Jenny Barnes or Wini Habbamock, then the .25 gets you there, and you should have the evasion chops to make it work. "Skids" will appreciate the fact that it's compatible with his strong parallel card back, and for Finn it looks a lot like extra copies of his Trusty .38, albeit less cost efficient and with a more restrictive use condition.

It's in those two investigators that I feel the .25 Automatic is at its best, since they're likely to appreciate it being fast purely for the sake of saving an action and maintaining strong play speed, and are able to add in the extra evade action to set up their shots without losing undue time. They're also the types who could want to keep a hand free for lockpicks or other investigation assets. The requirement of evading first helps delineate "Skids" gunplay from the hip firing of more dedicated combat characters, and is somewhat reminiscent of machete's "drawback" of getting a guardian to sometimes spend an engage action before attacking - it encourages good practice. Evading enemies is more work, but when an enemy has retaliate or might swing at you for big damage if you miss a shot then needing to evade it beforehand can stop you from getting greedy, and it feeds into a playstyle that could feature cards such as Sneak Attack. It's a silver lining to a fairly demanding play restriction.

In conclusion, don't be put off this weapon by the shadow of its big brother. If you're willing and able to work the evades, this card can be the basic, scenario one weapon you've always needed to leverage a moderately good fight score into a reliable source of two damage hits, and it won't even slow you down during set up.

RichardUptonDeckman · 17
The reason 5 is the golden breakpoint is that 3 is an extremely typical enemy fight value, and on Standard, -2 is a very solid breakpoint in most chaos bags. Fighting at 5 means not having to commit to most enemies, and only needing a few pips to either nearly guarantee an important attack or put yourself in reliable range a couple times each scenario against the occasional 4 or 5 fight enemies. — Death by Chocolate · 796 10/11/20
I just want to point out the synergy with Hatchet Man. It's not much, but if you're doing that kind of build anyway, I think it's worthwhile. I think honestly it's easier to compare the .25 Automatic to Sneak Attack of all things. Sure, SA is testless, but this is sort of like having 4 of those on standby for only 2x the price (so, if you land all of them, it's half the cost in resources). — StyxTBeuford · 12473 10/11/20
Hatchet man is for skill tests, which means you can’t use it with Trish’s automatic evade. What a shame. — MrGoldbee · 1061 10/12/20
It might be an option for parallel Skids, but regular Skids has a lot of other weapons available to him so it's hard to justify a .25 Automatic. — Killbray · 54 10/27/20
I guess I'd run it with Cheap Shot to deal with odd-health enemies who have high evade. A pretty niche card, to be sure. — Pinchers · 41 11/5/20
3

This came out in the same pack as Trish, but it’s a Dexter card. Or more broadly, it’s a “someone who is on a team with Trish“ card. You should pack a brace of these if you’re doing a multiple rogue run.

For agent Scarborough, this isn’t going to do any favors. Anytime that you’re plugging away at an enemy is time that you’re not getting clues. This deck spot could be used on an occult lexicon, or knowledge is power to use blood rite again. Or throw in a sneak attack, to damage without having to use your fist stat.

MrGoldbee · 1061
Have to disagree with you there friend. I'm using it in my Trish deck and it's working wonders. You can't always run forever and getting clues is quick and easy so I find myself not minding the cost in actions and resources to get someone real nasty off my back for good. I mean, you're already evading with your ability with Trish from time to time anyhow. — LaRoix · 1469 10/15/20
I agree that you don't really want to run this in Trish when you could run Blood-Rite or something like Backstab or Sneak Attack. This is the best gun in Rogue for Trish but testing at a 4 isn't great. It is usable but it is going to require a lot of skill cards or resources (Hard Knocks) to kill anything significant. It isn't great in Dexter either since his Agility =2. It is a great weapon for Finn, Skids and Jenny though. — TWWaterfalls · 735 10/15/20
My first thought was Finn, because, with his extra evade action, the drawback is pretty minor, and +2 is very good. This makes a lot of sense as it's very similar to his signature gun. — Zinjanthropus · 162 10/16/20