Back into the Depths

신화
주요목적. Stage 1
단서: –
Finally you reach the gateway to the final depths: a swirling vortex of otherworldly currents beyond which Y'ha-nthlei, the city of the Deep Ones, waits. Somehow, you must gain entrance...

Objective - If each investigator is at Gateway to Y'ha-nthlei and the investigators possess each of the following keys (blue, red, yellow, and green), advance. 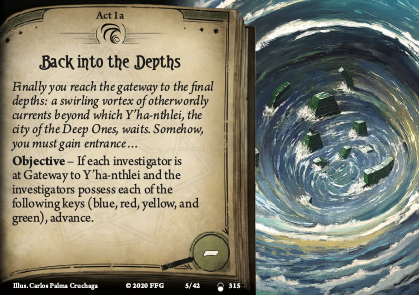 주요목적
A maelstrom of currents tugs at your flesh as you cross through the gateway. When you emerge on the other side, you are no longer in the simple tidal caverns beneath Devil Reef, but inside a vast city within the depths: a city of otherworldly, alien architecture and, surprisingly, riches beyond your wildest imagination.

Remove each location other than Gateway to Y'ha-nthlei from the game (or add them to the victory display if they have Victory X and no clues remaining). Discard each card at those locations.

Put set-aside locations into play as shown in the Campaign Guide, following the "Act 2 Setup" instructions. (Note that the number of Y'ha-nthlei locations used and the arrangement of the locations varies depending on the number of investigators in the game.)

Put the set-aside Hydra enemy into play in the Lair of Hydra, (Deep in Slumber) side faceup. 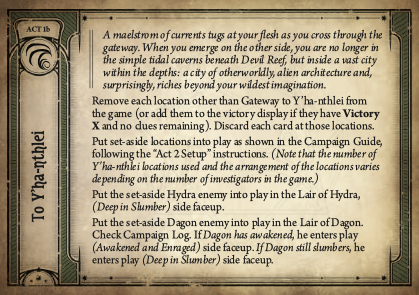 This is probably the most annoying error to date, they printed and had to errata. We have played the scenario more than 3 months ago, not aware of the bug, and it still bothers me a lot. So I thought, it might be a good idea, to give people extra attention to this errata.

It was our second run of Innsmouth and first ever campaign on hard, and up until then, we aced it, unlocked all the Flashbacks I to XIII. As a result, we got all 4 required keys to advance during setup, and because everybody starts at Gateway to Y'ha-nthlei and there is no "may" printed on the card, we had to immediately advance and started the game in Act 2. But by doing so, we didn't have the opportunity to grab some additional keys, we would have needed to unlock:

We had achieved the second bullet point on our Innsmouth blind run, and found it a rather easy campaign final on standard, but playing the scenario without the optional objective was a completely anticlimactic and lame affair, and loosing out on the Flashbacks double stings.

Susumu · 217
Considering that's based on an obscure and unintuitive ruling and they immediately errata'd it, I'd say the fact that, in the same level, Dagon and Hydra have useless actions printed on them is a much more annoying error. — SSW · 180 2/16/22
Why ist the action useless? There might be doom placed on them. — PowLee · 13 2/16/22
I also don't get, what you mean, SSW. How is the action on them an error? If you want to stay on the location, it is better to try to evade them that way. Of course, you need a character to likely pass the willpower (4) test, but it is a legit action. The forced advance on the other hand is an annoying bug. Yeah, they errata'd it. But we don't doublecheck every card during play, if there might be a missprint. At that moment, we were not aware, that this would cost us Flashback XIV and the rest. We were playing it for the second time, and the first was more than half a year earlier. It was a critical mistake, we now know. But it is likely to not notice it during play. — Susumu · 217 2/16/22
Dagon and Hydra untap then check to see if they are untapped.... — Zerogrim · 248 2/16/22
Gotcha! I indeed missed the "At the end of the round". Yeah, you could still remove the doom placed in the previouse round. But obviously, exhausting them is pointless. — Susumu · 217 2/16/22
I think the important part about the action would be to remove the doom, not to exhaust the ancient one. So I wouldn't call it pointless at all. I guess the default is supposed to be that you place doom on them while you're in their lair. Given that there are edge cases where you can exhaust them during upkeep after they readied, I still think that checking whether they are ready at the end of the round still makes sense.nk it's still appropriate that the game checks whether the ancient one is ready or not for the case that you trigger an edge case where you exhaust them during upkeep. Example for such an obscure edge case: Draw Overzealous, get an encounter card with a skill test, commit quick thinking, succeed by 2, use the extra action to evade them. — PowLee · 13 2/17/22