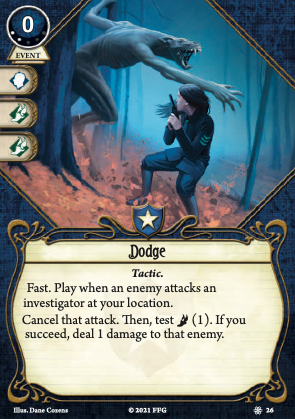 The following investigators with access to Guardian 2 have at least 3 agility and thus can reliably counter-punch out of the gate without too much assistance: Skids, Diana, Lola, Mark, Mary, Lily, and Yorick.

Of that list, Diana and Mark already run dodge as a pretty meta card, and I think that we may be seeing more characters joining in on Diana's shenanigans of 'just say no and get rewarded for it.' But I think the real winners here are Skids and Lily.

Skids really struggles to accomplish things. He can either build up a fortune with his parallel front, or get a ton of actions that do very little with his base front. This likely will play into his parallel front's sort of 'pseudo-testless' archetype, weaponizing low agility tests to force things like Lucky Cigs or Watch This to generate rewards for lowball tests. But more important than the low test value that Skids can easily pass is the fact that this is yet another 'ping' that parallel front, standard back Skids has access to, and as we know from Trish there comes a point where testless effects reach a critical mass and suddenly become an archetype. Skids already feels on the edge of that with cards like Dynamite Blast, Small Favor (Which is bad on most rogues but Skids has a lot of ways to get it to fire off between Dodging, Evading, or just spending the extra cash to 'snipe' with it), Delilah, and Beat Cop. Combined with Hatchet Man, Backstab, Sneak attack, and Cheap Shot, and we are starting to see a lot of ways for Skids to spam events and assets to do quite a bit of damage while keeping enemies exhausted and himself rich and full of cards. Maybe 2022 will be his year!

As for Lilly, she has a few things that make her want this wonderfully thematic 'counterstrike.' Firstly, she needs to spend a deck slot for base dodge, so this saves her a slot for another level 0 she may want more.

Secondly, her lack of firearm access locks her out of most of the high damage guardian weapons. She certainly isn't totally out of luck in that department, Cyclopian Hammer and, if your running blessings, Holy Spear can really mess someone up, but for the most part its hard to deal more than 2 damage with a melee attack base, and even the 'big melee' stuff struggles damage wise and are more utility options due to capping out at 3 damage and not having access to custom ammo for that late campaign damage push. So like most guardians who run the more 'utilitarian weapons' as their primary, she really wants pings, and a few of her really strong weapon upgrades (like Butterfly Knives and Survival Knife) already have synergy with dodge.

Finally, it is very likely, at least in my opinion, that Balance of Body will be the 'meta' secondary discipline you take at 15 XP, simply because it has the strongest 'burn' effect, and the easiest flip condition, which are both highly relevant for Lily. Upgraded Dodge plays into the 'super turn' ability well because the bonus agility obviously helps you out if your using this on a random lone enemy your not popping Balance for, but it also helps both in the context of needing one last bit of gas if your 'super-turn' doesn't take everyone out, or if your caught without access to it due to a bad draw of your weakness, which you likely took Balance of Body in part to handle due to how hard it can be to flip Persistence of Fate, and it being slightly tricky to flip Alignment of Spirit in some campaigns (like say.... Forgotten Age).

Those last two also synthesize into being a compelling reason to take pings in Lilly overall: Lilly is likely going to be doing 2-3 damage an attack, meaning your getting a lot of breakpoints where 1 extra damage will let you kill something big you otherwise couldn't quiiite get. A low damage weapon is more vulnerable to unlucky autofails, making the dual insurance of an extra damage and a guaranteed defense (potentially on a fellow gator even) to ensure you have a full extra turn to try again very powerful, and helps makes even your superturns more flexible with your low damage weapons.

Mark may want it just because its a bit more extra damage he can push with Sophie late in a scenario, and the guy runs Dodge basically 24/7 anyway, so assuming there aren't any super spooky symbol effects in the campaign, why the heck not? Sister Mary is very physically fragile, so dodge isn't actually terrible on her despite the fact she has her own 'holy dodge,' and she often plays a more supportive role than most other guardians anyway, so her joining Diana in shouting "No no no no no!" isn't out of the question. But I don't think we will really see dodge+ in most guardians besides Lilly (and off guardians besides Skids and maybe REALLY late campaign Dianas who are comfortable with bad symbols) until there is either some passive agility boosting in guardian attached to a good effect (Which is essentially what Balance of Body is), or we see until we see more pings in guardian.

It's thematic, but kind of a bummer for the investigator, who would like it most, that this card tests : Nathaniel Cho. He loves cards, that could trigger his ability out of the investigator phase, and there are not that many. So far, I've found:

So unless I have missed one, this would be the seventh option for him. (Not talking about really weird exceptions, like a Teamwork to take Chuck Fergus to do either version of One-Two Punch out of turn. ) But testing ? The only possibility I see, how this might work for Cho, would be spending money on Combat Training. This card also got an Upgrade, which is coincidently right the next card in this pack. It makes, among other things, passing the check 2 resource cheaper. But I'm still not sure, if this would be worth it.

Susumu · 206
You could invest in Defensive Stance, but that's 1xp more to mimic a less powerful Counterpunch (2) that guarantees you don't take a hit. — toastsushi · 62 10/8/21
I'm honestly not sure how you would even fit this and defensive stance in a Cho deck, he has so many good fight events already that I would be loathe to cut any for Dodge (2) and Combat Training. Instead of spending 2 cards to deal 2 damage during the enemy phase, he could just fight with one of the many 2 damage events on his turn. — suika · 8471 10/8/21
That's a fair point. I'm planning to give him +5 decksize for "Down the Rabbit Hole". But it still might not be worth it compared for other and better fight events in investigator phase. Also, I likely need some deck space for tutoring the Gloves )(may it be Backpack or "Calling in Favors") to make up for the increase of the deck. — Susumu · 206 10/8/21
0

Can this card be copied with Double double to deal 2 damages (if both agility tests are successful) ? I think that on the copy the attack can be cancelled (because it has already be done) so what follows "then" isn't triggered. Am I right ?