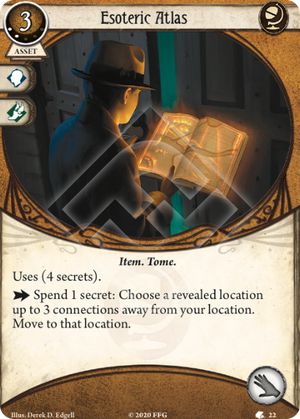 I want to build on the conclusions of @Tsuruki23 below: "You can teck this like a silver-bullet against scenarios that you know involve heavy backtracking or back and forths." It's very true -- in a generic scenario, in which you're simply using the Atlas for mobility, it's a mediocre card. Basically, you're paying 5 actions, three resources, and a 2xp card for 12 moves -- and that's if you manage to use all four secrets. But in certain scenarios, it's a godsend. I'll give four examples. Don't read this review if you want to avoid spoilers!

"The House Always Wins": That title has been quite true in my experience, until the Atlas came along. When you play this scenario second, you're faced, late in the game, with an almost impossible task. In very short order, you have to get to a locations three spaces away, parley with some fool, and then get to the exit, which is three more spaces away. In between are likely to be a gauntlet of enemies, guarding a pair of locations that form a bottleneck. The final agenda is likely to be running out, and even if it isn't, you only have a few turns to rescue your target before the Bubblebath from Hell squelches him to death. The Atlas lets you helicopter over ALL that. It doesn't just save you two moves; it saves you any number of fight and evade checks, and quite likely a bunch of damage and horror, too. Once you pick up your man, you can medivac him out of there with similar ease.

"Doom of Eztli": After you yield to your inner Indiana Jones and snag the shiny artifact at the center of the temple, you'll be faced with a tall order -- navigating back through the temple, which now forms a continuous, snake-filled tunnel. You can try to hack your way through it all, or... you can pogo-stick along with the Atlas. You can probably be home free in a single turn, with two bounces and a resign. And since you don't have to teleport EXACTLY three spaces away, you can just land on the empty locations and bound over the crowded ones.

"At Death's Doorstep": The Meiger party is a relatively tame affair until the Watcher and his spectral crew crash it. Timing your getaway can be difficult -- since you want to wait until you've rescued at least as many Lodge minions as the Watcher has dementor-kissed. If you have the Atlas in hand, you can resign in two actions from literally anywhere on the board -- one to hop to the exit, the other to resign. And if you still need to bounce around the map a bit for clues or anything else, the Atlas will help you do so while avoiding the Watcher.

"The Wages of Sin": This is one of the few scenarios in which all locations are always revealed. That means that from turn 1, The Atlas gives you exceptional mobility. You'll want it. It's a grueling, miserable, scenario that has you trekking back and forth across map, often while lugging a bagged witch who's casting curses on you every step of the way (if you've played it, you know what I mean).

I could go on and on! The general point is that every campaign has some scenarios that involve back-tracking and racing to the exit, and others that are more or less a forward march (think Essex County Express). I would recommend snagging the Atlas only for campaigns you know, and then only if you think the scenarios in which it's useful would be dicey otherwise. For instance, the Atlas is very helpful in "Doom of Eztli" and "At Death's Doorstep," but most players can handle those scenarios without special tricks. "The House Always Wins" (as scenario 2) and "The Wages of Sin," on the other hand, are downright brutal scenarios, and there the Atlas can have a huge impact on your odds of a good outcome.

Mordenlordgrandison · 281
Neat take on The House Always Wins. — MrGoldbee · 1005 11/3/20
There are actually quite a few scenarios where "burst movement" might be useful -- in TDE alone, the last 3 Waking scenarios could benefit from a couple of 3 location moves, TCU has potential in The Wages of Sin, For the Greater Good, In the Clutches of Chaos, and (maybe) Before the Black Throne. It allows Seeker-access investigators to stray from the fighter(s) to get clues and VP and run back when necessary. It is certainly more attractive now that The Segments are so pricey, although the Seekers really need more hands. — LivefromBenefitSt · 535 11/3/20
"Big map" Carcosa as well, especially in scenarios 3 and 8, where remote locations will start out revealed. — Yenreb · 9 11/3/20
1

3 Locations away is a routine situation that you might find yourself in. From the exit, from an important location, from a friend. You can use it to bypass intervening enemies. The only issue is the revealed requirement, which is why it's mostly a Multiplayer card.

You can teck this like a silver-bullet against scenarios that you know involve heavy backtracking or back and forths.

For 1 XP, this makes a very nice upgrade, if you have a Seeker (or Seeker-adjacent) investigator who absolutely, positively has to get there. Much as I love my "2 Pathfinders in play" Seekers, this lets you skip the intervening locations and their pestilent enemies. I am slightly giddy imagining this plus Arcane Enlightenment in Roland. What elese is he doing with his Arcane slots?