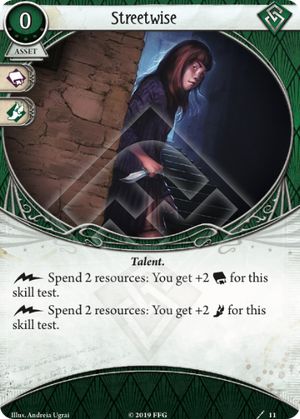 Hasn’t been a lot of chatter about level 0 yet, but I can attest that it is very solid in Preston. If he can get it down, his extra 4 resources a turn can put him at a 5 in agility or intelligence for a test. And he’s usually building to have a lot of resources anyway. That’s a lot of flexibility for level 0 Preston. After tabooing level 3 so heavily, I’m surprised they released level 0 as such a strong card. Granted, for other rogues it can be expensive, but this is the class built for making resources. This card fits well in any resource-heavy builds.

christhelibrarian · 4
This as a one of in parallel Skids is really nice since he gets so rich, and then you upgrade it and have an extra spot in your deck for something else lvl 0 without taking Adaptable. It's a solid stat booster at level 0- costing nothing to start with is a huge point in its favor. — StyxTBeuford · 12504 12/12/20