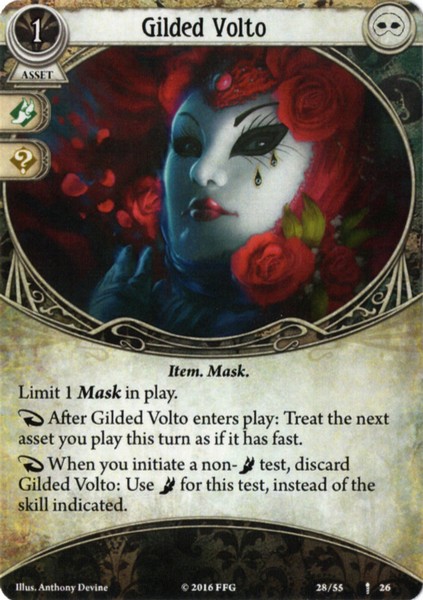 For a long time I have sat and theories why you would take this card, the only clear solution is "you are playing a character with really high agility", and yea maybe you pick this mask for the alone but its coming into play ability as far as I can tell is worthless, it is even worse than if the mask itself had fast (given then you could fast play it to be able to clear a tricky test).

Perhaps there is some potential here but everything I think of would be better served by switchblade level 0.

Save for one lone soul, one light in the darkness who sees a non fast asset that plays an asset and smiles, who sees the icons on this card as being more valuable than the discard effect.

You can put Volto into play fast with his ability (and for free) then immediately get another asset into play without spending an action, then the turn afterwards you can feed his ability with the mask that remains in play.

The only other option for Dexter realistically is the willpower mask and I've never really needed healing as Dexter, and swapping tests out for willpower is pretty easy to do without the mask anyway.

Zerogrim · 171
Another person who might like it is Yorick, who can play it from discard pile on a kill to get a fast play of a card in hand. Though admittedly, he would much rather have bauta — NarkasisBroon · 1 1/15/21
Yea I think I personally would always take Bauta as yorick but if someone else wanted it I could see geting use out of Volto. — Zerogrim · 171 1/16/21