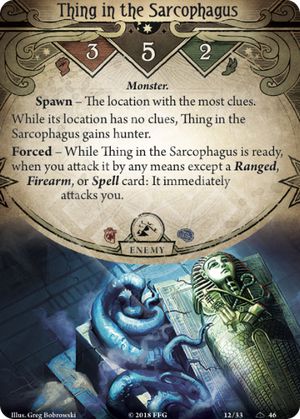 This enemy is one of the factors that make Guardians of the Abyss hard. Not the biggest of course but it has 5 HP and it can potentially spawn very first round and dealing 5 dmg is not an easy task in the early stages of the scenario. It can be evaded, sure but that requires investigator with at least decent evade.

I'm not sure if I understand forced ability correctly. If I attack it with a knife then it immediately attacks me back and by doing that it gets exhausted afterwards and does not attack during enemy phase? Or it does not exhaust?

bugiel_marek · 1
Enemies only exhaust after attacking in enemy phase. That's a mere mechanism to mark, which enemy has already taken their turn, like flipping the investigator card. (Although it can be taken advantage of with some card effects.) For instance, an enemy, who makes an attack of oportunity also does not exhaust. — Susumu · 132 5/24/21
But it's clearly written in rules that attacks of opportunity do not make enemy to be exhausted afterwards. Here it's not aop. — bugiel_marek · 1 5/24/21
v — bugiel_marek · 1 5/24/21
Please don't get me wrong, it's not like I want to force this understanding of cards wording, I've played it like you suggested all the time. But I stumbled upon this card yesterday and read it's text carefully and wasn't sure what to make of it. — bugiel_marek · 1 5/24/21
The only mention of enemy exhausting is after they make an attack in the enemy phase. In no other occassion do enemies exhaust after making attacks. — suika · 7644 5/24/21
So since there's a place that says when we exhaust (and it's mentioned only there) then it explains it all. Thanks guys. — bugiel_marek · 1 5/24/21
In addition, this enemy attacks before your attack is resolved, because of "when" timing sequence. Therefore, even if you defeat this enemy, this enemy will attack you one time. — elkeinkrad · 151 5/24/21
Thanks @elkeinkrad for reminding, this makes it even nastier. — bugiel_marek · 1 5/24/21
Why this enemy doesn't get a VP is beyond me. It certainly is worthy of one. — Soul_Turtle · 1 5/27/21
If I were to guess why that is then I'd say that most likely whole scenario could potentially give too much exp. — bugiel_marek · 1 5/28/21
This. Plus the game might end up with to few enemies in the encounter deck otherwise. This is still relevant with one or two players, as Agenda and Act advancements reshuffles the discard pile into the encounter deck frequently. It sure is an enemy, that would be worthy a victory point, but there are others in the game, that aren't worth one either. I think, the difficulty of an enemy is one, but not the main consideration in design, if it is worth an XP. — Susumu · 132 5/29/21