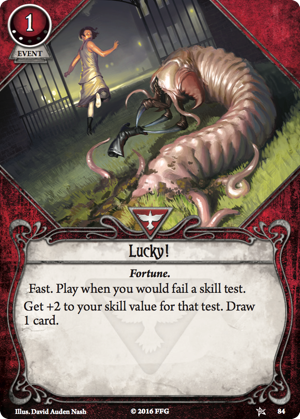 Lucky! is a superb card from an angle of flavour and universalism. A survivor's trait is escaping dangerous situations rather than appeasing them by force of arms.

Considerations about the value of this card are found under the basic version of Lucky!(0)

The upgraded version has to be evaluated a bit different. While Lucky!(0) can be recommended without a second thought, Lucky!(2) costs 2xp. Someone claimed "Definitely one of the best cards in the game, Every character can run it at all times and the levelled up version is even better! must have in all decks that can run it!"

I disagree. The additional cost of 2xp have to be put into relation to the additional effect that the upgraded version gives you.

The difference between both is "Draw 1 card." That is it. While generally useful, there are plenty of cards which give you better bonuses at the same price. As always, it really depends on the difficulty setting and personal playstyle. For a deck that takes advantage of events, or wants to speedily sift through the cards, Lucky!(2) probably pulls it's weight.

Synisill · 725
I agree that the additional card draw seems underwhelming for 2XP. Though, it's always handy to consolidate actions, especially when you're in a hurry or when you want to make room for other, more powerful, XP cards in your deck. As such, Lucky! is rarely my first upgrade, but seems to gain consideration as a campaign goes on. — Herumen · 1481 6/11/17
2

One card for two XP is not that great, right? Might as well stick with Lucky0, right? This changes when recursion joins the mix. Lucky is on of your top cards, and will be a prime target for Resourceful recursion. True Survivor can bring back Resourcefuls for even more Luckies (and Silas can make sure those Resourcefuls land, or even play them again with his Elder Sign). With the right north wind, you could find that 2 XP netting you 3 or more free cards. Suddenly, this seems like a better deal...

duke_loves_biscuits · 852
Yes, I agree, if your deck plans on recurring events a large number of times, paying XP for small upgrades to events makes more sense. — CaiusDrewart · 2230 6/26/18
Survivors have few upgrades that dont require deck changes and have a relatively low bar for what's considered a "complete" levelled deck, lucky (2) is one of those few upgrades that dont require changes. — Tsuruki23 · 1823 7/31/18