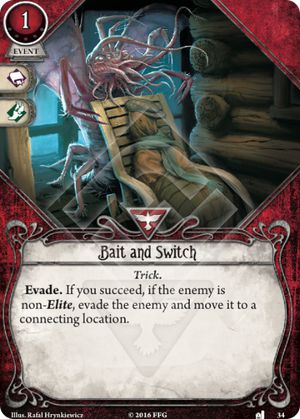 When playing alone, this card isn't very effective, as it costs an action and the enemy still need to be dealt with, later. However when playing with 2+ investigators, use this card to "push" enemies to the monster killer, so he doesn't need to move to it.

What's even better, push an enemy to another one and let your guardian Dynamite Blast them.

Django · 2800
The Dynamite Blast was exactly what I was thinking, though I do believe it has its uses in solo play. For example, suppose you have a monster in a central location like the Miskatonic Quad in Extracurricular Activites scenario. Pushing the creature out of the location is beneficial since you have to return to the location several times throughout the scenario. — FractalMind · 22 2/21/17
Like it in Casino Always Wins - nothing like feeding mobsters to the monsters. Well timed BAS can also throw enemies to lost cars in Essex County Express. Generally stacking non-hunter enemies in some unused location isn't bad. (Forgotten age seems promote evade aproach) . Unless next Agenda will state: "All enemies of given type gain hunter keyword " — theczarek · 2 3/6/19