장소
You approach an unmarked door toward the back of the Clover Club. 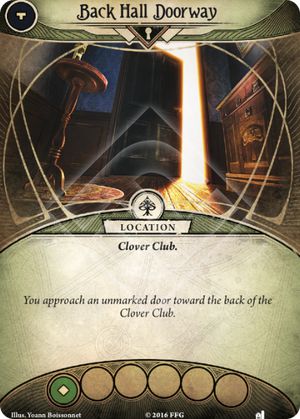 : Resign. We can get out this way!

승점 1.
A steep, narrow staircase ascends to a second unmarked door. To your surprise, it leads into a back alley behind La Bella Luna. This must be where they smuggle in their "goods."
Mark Molnar
던위치의 유산 #77. 도박장은 언제나 이긴다 #16. 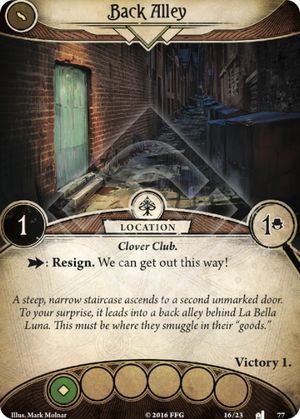 This location card is somewhat misleading. The resign ability causes the player to conclude the game as if they are eliminated. When that happens they would drop remaining clues from their investigator and not get the printed Victory point.

Glasshound · 9
Yeah; might be an early design oversight. I double-checked the act/agenda cards as well, and they don't mention clues behaving differently than normal either. — SGPrometheus · 686 5/1/19
Even if the devs didn't admit it, I believe this is an oversight too. For example they refuted that the connections in Blood on the Altar were bugged, but then corrected them for Return. — jd9000 · 68 5/1/19
I am not so certain it is an oversight, since it is unique to see such an easily-cleared location (Shroud 1; Clues 1-per-investigator) with a Victory 1 on it. The fact that it's actually somewhat tricky to *keep* clear justifies this. — Cluny · 51 5/7/19
The way it works is so counterintuitive that I am convinced most of the players won't catch that they should not get the victory point. And, considering how VP are scarce in Dunwich, it is a welcome small bonus. — Alleria · 106 6/13/19
But I do get the VP if I investigate before I resign, right? — Vortilion · 1 11/25/19
@vortilion, RAW - if you have any clues during resign, no, since you should place all your clues during your resign — Yury1975 · 1 12/21/19
It is clearly an ovesight. How on earth are new and even old players gonna remember these kind rules. I'm getting the VP and certainly not gonna feel bad about it. — NotSure · 18 5/25/21