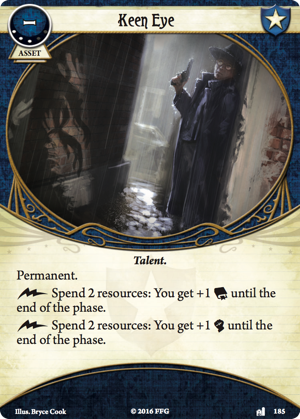 Compared to the other XP permanents, particularly Higher Education and Streetwise, Keen Eye has a couple things working against it. First, except in an ideal situation its ability is a bit less efficient in terms of resources spent per bonus. Second, Guardians are heavily dependent on expensive assets, and all their in-class economy cards (Ever Vigilant, "I've had worse…", Stand Together) cost XP. So they probably don't have a ton of spare resources to devote to a card like this.

For these reasons, I think a lot of players underestimate Keen Eye. This is a mistake. It isn't as good as Higher Education or Streetwise, sure, but it's really, really strong. This is largely because of the amazing power of the Permanent keyword.

Don't think of Keen Eye as adding a card to your deck; think of it as adding an ability to your investigator sheet. Like your investigator ability, it's going to be there for you whenever you need it. And Keen Eye's ability is really useful. Combat and Intellect are the two game-winning skills, and the ability to substantially boost either one whenever you have extra resources is really nice. It's often the case that you'll want to spend your entire turn investigating or (more likely) fighting, and in these cases you can get some really nice efficiency out of Keen Eye.

But the true power of Keen Eye comes from the sheer consistency it offers a Guardian. The simple fact is that sometimes you really, really need to boost Combat, and you just don't have the right icons in your hand. In these situations, Keen Eye will always be there to see you through. As long as you have some resources (and that's something you can plan around), you will be able to boost yourself in an emergency. Your combat performance will therefore be much more consistent. I consider this incredibly important.

The fact that Keen Eye sometimes is genuinely efficient (if you can get +1 to 3 tests from 2 resources), in addition to offering consistency and security, is why I consider it one of the best cards in the game.

Obviously, Keen Eye is best for Zoey, who often does end up with excess resources. Keen Eye is a great way to spend them. In addition to the combat use of this card, discussed above, spending four resources and investigating like a Seeker for a turn is an awesome trick for her to have up her sleeve. In a multiplayer Zoey run I would very likely purchase this before any other upgrade, and in a solo Zoey run (where boosting her Intellect becomes very important) the decision is even more obvious. For the other Guardians, it's less urgent, but it's a good card to pick up before too long.

As a final note, Keen Eye has a nice interaction with Police Badge. It's an expensive combo, but five highly charged up attacks are a pretty cool way to take out a boss.