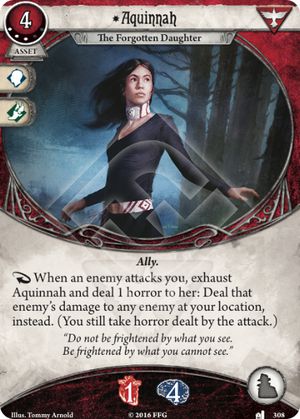 With experience comes insight. Gladly, you followed the path of meekness instead of suffering from an inflated ego, my sweet friend! Your new powers make you an invaluable ally for any survivor character which i can recommend without reproach, especially for solo play.

The additional cost of 2xp have to be put into relation to the additional effect that the upgraded version has. So let us have a look: play cost is cheaper by 1, there is an additional icon for skill test commitment and the reaction has lost it's targeting limitation.

The strongest argument for Aquinnah(3) is her upgraded reaction ability. In comparison to her basic version, at least one enemy must be present at your location to trigger the reaction. It is possible to reflect the attacker's damage upon itself, eventually killing it. Because damage and horror are applied simultaneously, the attacker's horror still lands. Another bonus of the enhanced effect is that it is not limited to the Enemy phase (Step 3.3) anymore. With her, you can now enter a location with a foe being ready and perform any action - it's Attack of Opportunity will trigger Aquinnah's reaction and kill it.

The Forgotten Daughter shows off in boss fights - reflecting an Ancient One's massive damage onto itself is nothing to sneer at! Together with a powerful combo, e.g. Will to Survive, in the subsequent turn, Aquinnah reliably turns the tide of the most ferocious battle into your favor!

Her only drawback is the one-time use restriction per round, which can solely be circumvented by Ashcan Pete.

EDIT: removed the cringy self-congratulations for finding an exploit in Arkham Horror.

Because I apparently need 200 characters minimum in a review, Step 4 could be either; turn the Watcher's attack on itself, or better yet, make it your attack dog and deal three test-less damage to any fool who dares step up to Patrice.

Lucaxiom · 2201
I don’t think you can deal damage to it when it’s in your hand, only ‘fight’ it as if it were at your location. — Difrakt · 847 12/9/19
You can fail the test, let it spawn engaged with you and then take an attack of opportunity. Not sure this is the most efficient way to deal with it though. — Sassenach · 134 12/9/19
It's actually quite an ingenious plan, particularly the part about carrying the Watcher around and using it to kill other enemies. Don't think it's game-breaking though. Aquinnah is a 4 cost asset and Patrice only gets one opportunity to play her. Holding 4 resources in hand while you wait to draw her isn't exactly efficient. It's a fun exploit but probably won't be used much. — Sassenach · 134 12/9/19
I can see some use in dealing the Watcher's damage to other enemies, not back at the Watcher. But for this you need to have a viable target at your location at the right time and you also gimp yourself by having -1 card in your hand. So while the combo is certainly potent when it works, it is difficult to setup and has a few downsides. In my opinion it is a fun, but janky combo, not a gamebreaking exploit (like infinite Jenny for example). — PowLee · 9 12/10/19
You don't need to keep it in your hand; you can purposely fail an attack to spawn it at your location, and trigger the attack reflection 3 times on other enemies before using the forth reflect needs to be used on the Watcher itself. if you have another investigator at your location, you can have them engage enemies for you so you only get attacked once per round. Failing that, you can play cards like hiding spot or infighting to delay attacks as you position yourself for maximum damage output. Failing that, good enough evade options will achieve the same result. — Lucaxiom · 2201 12/10/19
@Lucaxiom Excet that Aquinnah exhausts, so you can’t simply trigger three or four times. You have to space it out across 3-4 rounds which means lots of AoOs that can’t be cancelled or actions getting lost, or TN 5 evade checks that need to be made. Yeah, converting TN 5 agility tests into 3 damage hits isn’t the worst, but it definitely requires more than just the one card combo. — Death by Chocolate · 581 12/10/19
Relying on specific cards in your hand is quite the gamble with Patrice cause you'll discard them at the end of your turn. You could setup hiding spots in advance, but risking you're too far away when the watcher in play and enemy to reflect. Hiding spot and infighting are both rather useless, so i wouldnt recommend using them. Aquinnah 4 on the other hand is very helpful, even without the watcher. — Django · 3165 12/11/19
Tried this out on a whim on a Return to Midnight Masks solo run. I did get stuck under the watcher for a couple rounds, but Aquinnah made up for it by directing the Watcher at two masked cultists and one three-health doom accumulator. — Kergma · 2 8/16/20
Also, one key point: the Watcher is a hunter, so if you can evade it once and get the timing right, it’ll come to your targets. You don’t need to drag it around. — Kergma · 2 8/16/20