Brood of Yog-Sothoth gets +1 health and cannot be damaged or attacked except using the ability on Esoteric Formula. 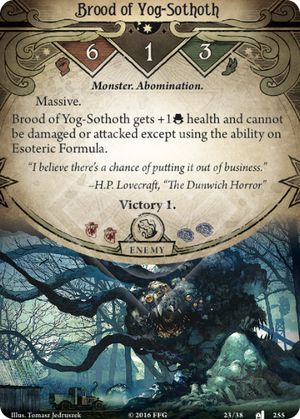 As time has gone on, many cards are released which can bypass the ability of this card. I'll introduce thoes cards in this review.

This is an older enemy, and a lot of this review may come off as obvious to more experienced players or has already been mentioned in reviews for other relevant cards, but I figured for the sake of those less experienced (or if nothing else just for fun) I'd write an extensive breakdown of this absolute monster.

First, the elephant in the room (the towering, invisible elephant): They can only be damaged or attacked with Esoteric Formula. The highest impact of this interaction is that your usual sources of extra damage are gonna get benched. I'll go into more detail on that, including a few workarounds, later on.

It has 6 Fight. That's a problem, but it's fair; your chance of landing a hit unaided against an invisible monster would probably be very low. Have your nimblest investigator pack the magic dust and grab some clues for those location effects. Mystics are at an advantage with their high , but with enough clues on your target, everyone should be able to hit consistently.

It has 3 Evade. That's a fairly lax difficulty for high investigators. Since it's Massive, and attacks for 2/2, you'll want someone to Evade basically every turn, if you can't secure the kill. Rita Young with Track Shoes and Peter Sylvestre is a star, she'll be able to dart around the map and keep threats down with aplomb.

Its health is 1 + 1. What this means is that in a 3-4 player game, at 1 damage per action, you won't be able to defeat it in a single turn. How do we get around that? If you're trying to get extra damage, you're gonna be ice skating uphill. (EDIT: No "additional damage"/"move damage" effects work.) Esoteric Formula uses , meaning Vicious Blow (and The Home Front) is out. Double or Nothing technically works, but is extremely inefficient—it brings the difficulty to an insurmountable 12, so you'll need a whole lot of clues or effects that can reduce the difficulty, all for one extra point of damage. Barring that, Zoey Samaras (via her ) and Lita Chantler seem to be the only ones capable of cheating out extra damage. Lita has amazing value here, but good luck getting her this far, un-sacrificed (to not one but two Ancient Ones!), with at least 3 mental trauma under your belt, and drawing her in time to make an impact.

For everyone who isn't a crazed zealot, leveraging extra actions is the way to go. Rogues should have no problem with that. MVPs here are Marie Lambeau, who can use Esoteric Formula with her free action; Stella Clark with Oops! and the usual gaggle of nonsense; and Tony Morgan, who in addition to being a Rogue can place bounties to get his free Fight action (but only on Brood that enter play after the game begins) (EDIT: He can use Bounty Contracts during scenario setup, thanks Nenananas!).

So that's some pretty sound strategy, but you're not interested in that. You came here for the jank, the cheese, the cherry-tapping, the Air Bud clause! Years ago, Django astutely pointed out the absence of the Elite trait, but at the time the options this opened up were less than stellar. Time went on, and more cards came out; these are mentioned in the comments of that older review, and have quite a few reviews of their own mentioning their use against this enemy. The two that take the cake here are Waylay and "I'll see you in hell!", because while the text on this enemy prevents it from being attacked or damaged by non-prescribed means, you can still defeat it any way you like.

Evade into Waylay + Resourceful is an easy combo for high Survivors (did I mention how good Rita Young is here?) that comes at a paltry two actions and a mildly spicy 3 resources. Mix in your favorite methods of guaranteeing success, keep the resources flowing as much as you can (On Your Own will help here, especially if your football friend ended up on the altar last scenario...), and if you’re feeling extra cheesy, recur it infinitely with True Survivor.

"I'll see you in hell!" is so-so by comparison given the cost, but with a favorable board state, it's a tactical nuke. Using it on as little as two Brood could still be considered a good value trade in certain circumstances. This is a questionable include for most Guardians, but Calvin won't hesitate.

If all else fails, swallow your pride and Resign. The better you did last scenario, the harder this one will be, and defeating all five is a tall order.

MiskatonicFrosh · 39
Or Mind Blank and kill it. It's not Elite. — MrGoldbee · 512 10/31/20
Mind Wipe is good in a pinch. It removes the VP, meaning it gets discarded, and might get drawn after the encounter deck gets reshuffled. — MiskatonicFrosh · 39 10/31/20
But you can just use the Mind Blank to deal most of the damage and Formula 1 damage. :) — Death by Chocolate · 581 11/1/20
True! You'd have to wait until the next investigation phase to finish it off though. I still don't think it quite measures up to the two I mentioned, but points at least for allowing people to use their more conventional cards, and for the Dayana Esperence combo. — MiskatonicFrosh · 39 11/1/20
@Death by Chocolate - Sorry, that won't quite work out like that. Mind Wipe also wipes all the additional HP, so if you use it on an already damaged Brood or damage it while it's being wiped, you'll defeat it right away. — TheNameWasTaken · 3 11/1/20
Tony actually can place his bounties on Broods that start in play, as Investigator setup starts before scenario setup — Nenananas · 131 11/1/20
@TheNameWasTaken You’re right! I feel silly for missing that. — Death by Chocolate · 581 11/2/20
Hatchet Man is a good one, especially in solo. I do think that, on the whole, though, the challenge of this scenario doesn't scale well to lower player counts. You have far fewer clues that you can add to it, even if you can set the location effects up (which is, itself, rather difficulty to do). The difficulty of the enemy's fight value doesn't scale at all. You will probably only get 1-2 with a low wp investigator. I think I got 3 with Wini, thanks to card draw and AYCDB. — Zinjanthropus · 155 11/2/20
0

Did they forget the "elite" keyword on these monsters? Otherwise you can use the following cards, to get rid of them:

However you don't get victory points, as an enemy needs to be properly defeated, to be added to the victory display.

Does the damage bonus from Lita Chantler work against this creature? It seems yes, because lita second ability is a reaction, that starts with "when", so it's effect happens before the trigger is resolved: "

Django · 3002
I'd say it's debatable that they "forgot" to add the elite keyword. The inherent card text provides way more protection than the elite keyword would, but on the other hand I'm sure they didn't intent to have these things end up in the encounter deck. — Pizzagoat · 1 5/17/17
What do you think about this one, speaking of non - elite ? — Dark Oracle · 11 5/23/17
https://arkhamdb.com/card/01068 — Dark Oracle · 11 5/23/17
If you have Lita in your deck, you're playing outside official rules anyway. — CSerpent · 84 5/24/17
Mind Wipe is also pretty effective (makes it 1 HP, removes damage restriction, meaning it can be auto killed by Beat Cop, Zoe's Cross, etc). — cferejohn · 1 5/26/17
Mind Wipe also removes "Victory 1", so the creatures won't be added to the victroy display, like with above cards. — Django · 3002 5/27/17
I have a suspicion the absence of the Elite keyword is deliberate to make sure you can use of cards like stray cat, bait and switch or bind monster on them to get away or what not. The fact it enables the disk or close call possibly wasnt a big concern to them designers since they may come back around in due course and you miss the VP if they dont. Note also that while mind wipe also does remove the VP (i think) its still useful for weakening it ideally down to 1 hp ready to finish it off for good next turn. It also turns off massive letting team mates walk away without attacks of opportunity possibly. — StartWithTheName · 31617 5/28/17
It seems to me that "I'll see you in hell" (from A Phantom of Truth) could be used as well. No attack or damage; the enemy is just defeated. — CSerpent · 84 12/21/17
Waylay from The Pallid Mask has the same effect as "I'll see you in hell!" And you don't have to blow yourself up to do it. — Tiktakkat · 32 1/30/18
Would Hypnotic Gaze does damage on Brood of Yog-Sothoth? — liwl0115 · 15 12/29/18
Would Zoeys Elder Sing effect trigger an additional damage? — Planetkill · 1 1/1/19
Hypnotic gaze does not work as it can only be damaged by esoteric Formulars ability. Zoeys elder sign should work cause it increases the Formulars damage. — Django · 3002 11/1/20