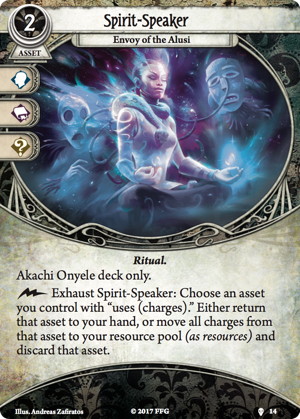 I was guilty of underestimating this card when I first saw it. I focused on the part of the card that lets you turn assets with charges into resources, and I was pretty unimpressed. And that aspect of the card is indeed, in my experience, pretty situational. It's not often you want to turn Shrivelling, Rite of Seeking, or Grotesque Statue--easily the best and most important cards in your deck--into a few resources. If you're running a bad, cheap spell like Alchemical Transmutation, then maybe that ability gets more useful... but I often don't.

What's great about this card is that it lets Akachi return emptied spells to her hand. This is so so good. Akachi is incredibly powerful with her high-level spells in play. In concert they give her the ability to dominate pretty much any scenario. She can get three clues or deal three damage in one action with success literally guaranteed, even on Expert (thanks to the Grotesque Statue.) The only problem is that her spells eventually run out. That would leave her totally helpless... except here's where Spirit Seeker comes in. Getting five more Shrivelling charges or four more Grotesque Statue charges (you need to leave one charge on that one before bouncing it) gives her staying power.

So, now that I have some experience with Spirit-Speaker, I would rate it one of the better unique assets. It's not quite on the level of Duke or Zoey's Cross, probably, but it's quite useful, and gives Akachi a much stronger late game if she draws it.