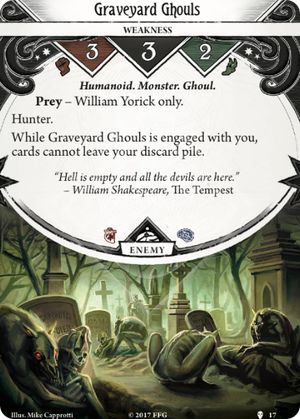 The first Enemy signature Weakness. Looking at the two elements, the effect and the discard condition, we get:

The effect: A relatively mild Enemy, the ghouls are likely to take Yorick 2 actions to dispatch, perhaps one if Vicious Blow or Brute Force are employed. If bad luck brings them out early, before Yorick has a chance to set up, they can be more troublesome, but no more so than a bad encounter deck draw. Their special ability is really only a problem if you are unlucky enough to draw them while engaged with one or more additional enemies

The discard condition: You kill them, which is something that Yorick is pretty good at doing. As usual, and investigator can deal with them, although Yorick rarely needs the help.

All in all, this is a below average signature weakness, generally offering only the mildest threat to the scenario.

LivefromBenefitSt · 882
This is actually a benefit because you can target the ghouls with bury them deep, so even on levels without non-elite enemies you can still get that juicy VP. — Zerogrim · 236 2/1/21
Assuming you draw BTD and don't have a better target, sure. — LivefromBenefitSt · 882 2/1/21
Dont knock that element of it actually. It’s incredibly convenient in less fight scenarios where you maybe didn’t draw your sig early enough to use it. It’s situational, but it’s helpful to know that you can consistently get the victory from your sig since your deck comes prepackaged with an enemy. — StyxTBeuford · 12683 2/3/21
The Museum-Snek mission is one of my least liked missions in the game. So... yeah. — HanoverFist · 481 2/4/21
Perfect example- this becomes your only valid target. — StyxTBeuford · 12683 2/8/21
0

Not a review, more of a question.

I suspect you can still play it and it will be forced to remain in your discard pile after the attack resolves, but I'd like to see some opinions. If that would be the case, it would be a very interesting interaction.

This question, by the way, came up while trying to build a Yorrick deck using the upcoming Cornered card, in which Improvised Weapon would be a good addition as it would be great discard fodder for Cornered. I believe Cornered is going to be a great addition in William Yorick's arsenal and Improvised Weapon can find a slot or two in his deck. Looking forward to the release of the pack!!

matt88 · 2497
I obviously mean: how does Improvised Weapon interact with Graveyard Ghouls while it is engaged with you. — matt88 · 2497 7/22/18
I would say it can be played as normal, since the card remains in your discard pile even while you're playing it. Since improvised weapon's shuffle effect specifically says to shuffle it after all effects of the attack have resolved, it will stay there after the attack, unless the attack kills the ghouls. — SGPrometheus · 633 7/23/18
I'm not sure sure, but i believe you ~cannot~ play it from discard pile. When playing cards, you take it from your hand (or other location) and put it into a in-between state (not quite in play, not in your hand or discard pile, just sort of in limbo) *from the faq on Time Warp* Since you are putting the card into a different are than the discard pile, and it cannot leave the discard, you likely cannot play it. That's how I see it; clearly FFG can have a different ruling. — CecilAlucardX · 9 7/23/18