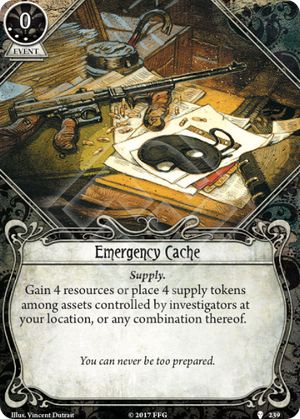 A deceptively powerful improvement over the basic Emergency Cache. Even leaving aside the powerful Strange Solution combo, this upgrade is fully TWICE as efficient as its base, if we assume that one card is roughly as valuable as one resource:

This puts Emergency Cache on similar footing as Cryptic Research (which is a straight-up net of two cards with no action cost), with the added benefit that it's impossible to backfire by drawing weaknesses.

The real question is, can we justify spending an additional XP over the 2XP Emergency Cache? Yes, I think we can. The ability to convert one card into four resources is more tightly focused than the ability to convert one card into three resources and a card. Being able to pull out a Lightning Gun or a Leo De Luca quickly can make a huge difference to an investigator's chances.

Obviously, Hot Streak is on a whole other level, but any investigator without access to higher-level Rogue cards should consider picking this up.

sfarmstrong · 257
An interesting case. I should say that the general assumption is that one card is stronger, and significantly so, than one resource. Perhaps you are right to say that if you're playing Emergency Cache, that's a sign that you really need resources, so card > resource calculus does not hold. Perhaps. — CaiusDrewart · 2793 6/24/18
In any case, though, 3 XP for an additional resource, if you're NOT taking advantage of the supply token function of this card, is grossly overcosted. Compare the upgraded Leo de Luca, which offers you a 1 resource discount for 1 XP. There are just a multitude of cards available to every single investigator which will give you far more bang for your XP buck. (If you ARE taking advantage of the supply token ability, then that's different. But if you're not, this is not a good card, at least not considering the XP price.) — CaiusDrewart · 2793 6/24/18
Well, I don't want to overstate my case. I'm not so much arguing that this is a top-tier card as I'm arguing that four resources is actually a twofold improvement over three, and that 3XP is reasonable costing for a twofold improvement over a 0XP card. Obviously, the card is only worth getting for characters who tend to need a lot of resources and don't have access to better economy sources - Zoey and certain builds of Finn, for example. Stand Together is lovely, but it doesn't address the common Zoey problem of having a huge gun in-hand that she cant get into play for an entire round. — sfarmstrong · 257 6/24/18
How exactly can Cryptic Research not backfire by drawing weaknessess?? — matt88 · 2652 6/25/18
He means emergency cache with that. — Django · 4299 6/25/18
I don't think I've ever used Emergency Cache of any xp level. Just vastly overvalued imo. — puert · 48 11/10/19
I like to include Emergency Cache if I play with Into the Rabbit Hole, because it has two upgrade stepping stones beging level 2 and 3. Especially upgrading from 2 to 3 feels great with Rabbit Hole, because it's "free" to upgrade. Also there are newer items in the card pool to reload with supplies, for example Bandages for healing and MK Grenades for damage. — Miroque · 16 12/18/21
3

This card is weird but in some particular cases it is awesome. With rogues, if you have Lola Santiago and Flashlight you have a really efficient combo where flashlight makes your investigate action easier by 2 and you can use Lola's during the test at a cheaper cost. You can do that 4 more times with Emergency Cache (3). If you have to use Streetwise to bump your intellect then the value of this card is off the charts (a little bit less than 16 ressources). Not a first buy obviously but a really cool card.

Last but not least, E-Cache 3 is a weird beast. I think there are some groups that will love this card, simply because you can get more uses out of your Strange Solutions, which is a monster of a card.

I don't often find the supply side of this card that useful outside of that though. Right now, there are just not as many crazy supply cards.

The extra resource can be very helpful though in some investigators who are money starved. I do wonder though if it is worth 3 xp for a potential of a +1 resource gain (it probably isn't).

Still, neat card with some potential in the future. I am looking forward to seeing where this card sits at the end of the next cycle.

A Backpack filled with this card, Strange Solution and the notoriously expensive Fingerprint Kit seems to be a really powerful combination of cards.