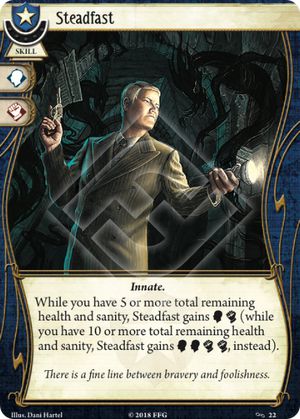 This skill is either good or terrible, depending on when you draw it. Tougher investigators who resist damage will like it better than the softer bunch, obviously it's the softer bunch that stands to gain the most by drawing Steadfast early.

If drawn early, the card can mount a defense for you against cards like Rotting Remains, which is great, but as time passes and your life goes down the defense weakens. You don't need to have taken too much hurt to be downed to just 2 icons per skill, in which case you're rocking a limited Unexpected Courage, further down the line it's just garbage.

In my honest opinion: If treacheries are your biggest worry as a , grab Guts and Take the Initiative, they are more consistent. If the icons excite you however, then by all means try Steadfast, even so, Unexpected Courage or Overpower might be more consistent.

Just to undercut my point though, choosing between Steadfast or Take the Initiative or Unexpected Courage is really just splitting hairs, if Steadfast floats your boat, then just enjoy!

Tsuruki23 · 2203
Even at 2 icons you’re never sad to see this card. The scaling for the early game I think makes it a better choice than Courage nine times out of ten. Also might be better than Take the Initiative for fighters, but if you’re running it mostly for protection then Take is probably better. — StyxTBeuford · 12683 7/12/19
To confirm, the "total" in the card is meant the combined total of your health and sanity? Because no investigator has 10 health or 10 sanity; 9 seems to be the cap. — LaRoix · 1572 5/2/20
3

Together with Able Bodied, this is one of the better Circle Undone skills. All current investigators will get the full bonus early in the game, which helps enable successful skill tests before the investigator’s major assets are in play. A combination of this and Take the Initiative would be solid protection against enemies and treachery cards.

jmmeye3 · 570
Funnily enough, playing this on early treacheries will likely make the second copy better, since you'll be healthier than if you'd saved it. — SGPrometheus · 633 2/1/19