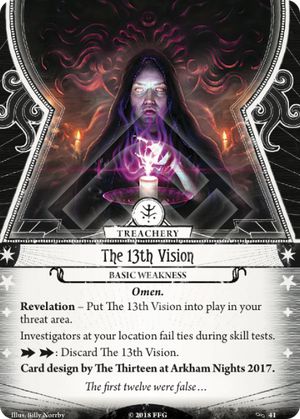 I may be wrong about this assessment, but I believe this card is essentially a more punishing version of the Haunted basic weakness. They do almost the same thing, but The 13th Vision affects all investigators whereas Haunted only affects the bearer.

For example, if you need to pass a 3 test with an investigator who has a base of 3 and you draw a "0" token, both Haunted and The 13th Vision will cause you to fail the test - Haunted would do it because it lowered your stat by 1 (causing a failure) and The 13th Vision would do it because you needed your stat to be one higher than the test to succeed.

The times where Haunted will be more punishing than The 13th Vision are tests like Rotting Remains where failing a test by 0 doesn't really mean anything.

Having 2 weaknesses that do very similar things does add a sliver of consistenty to an otherwise difficult-to-predict basic weakness pool, so overall I am glad to see a card like this one show up. It might be tough to deal with both weaknesses in play at the same time, though!

ArkhamInvestigator · 241
There is another way in which this weakness is worse than Haunted - difficulty 0 tests. Haunted can't make you fail those, while 13th Vision absolutely can. — TheNameWasTaken · 3 3/2/19
On the other hand, any cards that activate by being 2 or more over the target, or 2 or less under the target, prefer 13th Vision. — Prinny_wizzard · 58 3/2/19
Adding to the previous "On the other hand", any skill test that punishes you for each degree of failure is unaffected by The 13th Vision, as while you still fail the test on a tie, it will often end with things like "You take 0 horror", or "You place 0 clues on your location". — Lucaxiom · 2313 5/6/19