After a skill test ends in which 1 or more or tokens were revealed, exhaust Token of Faith: Add that many tokens to the chaos bag. 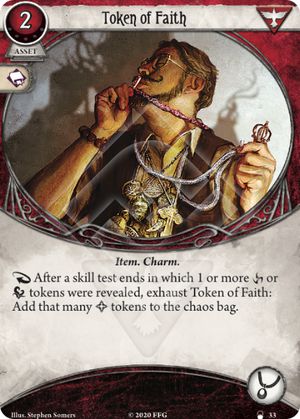 (1) I'm very surprised this isn't blessed-traited item like every other card that adds blessed tokens to the chaos bag.

(2) This is much better with a lower player count (1 or 2). After it exhausts, It can no longer convert tokens and becomes dead weight. "Ashcan" Pete can use his ability to ready it, and there may be a build here if he takes cards like Deep Knowledge, Faustian Bargain, and Tempt Fate.

(3) This works for any skill test. Not just your skill tests, or ones at your location.

(4) It takes an accessory slot and has to.compete against the card draw of Rabbit's Foot.

(5) I have a feeling this will become a staple in some solo survivor build. Perhaps a fail focused build that can benefit from having a lot of cursed tokens in the chaos bag. Currently the bless/cursed card pool is slim, so only time will tell.

Calprinicus · 3519
Saying Token of Faith is better in lower player count is like saying Shortcut is better in lower player count since you can only move 1 investigator. With more player you get more opportunity to trigger the card. — ak45 · 401 10/5/20
But more players means more tests for bless tokens to get removed, so it heavily depends. — StyxTBeuford · 12690 10/5/20
Look at the shadow for the reason it's not blessed. — Chained Dreamer · 1 10/18/20
6

This is a really bizarre card for a lot of reasons, and I think the best use case for Token of Faith is going to be extremely narrow and even there it might not be particularly powerful. The tl;dr is going to be as follows: If you want Bless tokens in Survivor , Keep Faith is a much simpler source of them, and you can save your accessory slot for something more broadly applicable unless you're for some reason desperate for more Bless tokens.

Contrary to user Calprinicus' review, I believe this is a far cry from being a staple card in any archetype, and it is going to be much weaker in solo than in larger parties. The latter is obvious really: larger parties take more skill tests, meaning more chances to reveal Curses and auto-fails, meaning fewer rounds where you miss out on triggering Token of Faith's reaction ability. Taking more skill tests is better for Bless tokens if you just wanted to use them for the +2 modifier because you are more likely to use them before the scenario ends, but a bit worse if you wanted them to stick around long enough for use with something like Rite of Sanctification or Radiant Smite. This is much more marginal than reliably getting your trigger every round though, so let's focus on that for a moment.

Firstly, you have to be putting Curse tokens into the chaos bag to reliably use the reaction often enough. Even in a four player game, there are not enough skill tests to reveal the auto-fail every round - and you do want to be triggering an effect like this every round for it to be pulling its weight. Just like you wouldn't play Dr. Milan Christopher if you weren't going to be investigating on most of your turns, don't play Token of Faith if you and your team aren't going to be drawing Curse and auto-fail tokens regularly. The good news is this will trigger on anyone's skill test at any location, and will occasionally grant multiple Bless tokens if some poor sod pulls multiple Curses or Curse into auto-fail. The bad news is that the Survivor card pool has no way of adding Curse tokens to the chaos bag, so we're going to need to go out of faction if we want to actually trigger this often enough.

Thankfully, that is the least of the troubles for Token of Faith. We're not that far through Innsmouth yet and Seeker and Mystic card pools have some great ways to enable drawing plenty of Curses, loading the bag with cards like Deep Knowledge, Stirring Up Trouble, or Promise of Power, making those Curses stick in the bag with Blasphemous Covenant, digging for the tokens you want with Olive McBride or Grotesque Statue, and you can even be rewarded for Blessing and Cursing in equal measure just like Token of Faith seems to want you to with Paradoxical Covenant.

The list of syngergies is long enough that I think we can assume that if you want to draw a Curse token or two every round, a four player party can make that likely enough by deckbuilding collaboratively, but I don't really care to do the math either way because even assuming you can reliably trigger Token of Faith every round for one or more Bless tokens, it is still much slower at putting out Bless tokens than the very next card in its deluxe box: Keep Faith. Keep Faith may be one-shot, but it is fast, and you can play it at the precise moment you want to load the chaos bag. Getting Blesses in a burst now is also better for both a guarantee that you'll have more opportunities to draw them before the scenario ends and to immediately set up any Sealing synergy. And these advantages only compound in Keep Faith's favor if we don't grant that the Curse token synergy is already there - and I think it probably is good enough, but still - Keep Faith gives you those four Bless tokens without asking you to mess around with Curses or give up your accessory slot for multiple rounds. It is just a much more reliable activation cost than Token of Faith, and that is huge when this game is trying to mess you up at every turn.

You can probably consider yourself to have overtaken Keep Faith in a value-cost ratio once you add your fifth or sixth Bless to the bag with Token of Faith, but this takes multiple rounds and you have to jump through so many hoops to make all those Curses show up often enough that it is just much simpler to take Keep Faith and use your accessory slot for something less conditional that won't just be committed to a skill test when you draw it past the third round. If you are absolutely desperate for even more Bless tokens and you've already included two copies of Keep Faith AND you or your team are loading the chaos bag with enough Curses - MAYBE you'll pick this, and as far as I am concerned this is the single niche that Token of Faith has. And even here Token of Faith faces stiff competition for your accessory slot. I have to imagine that any low sanity investigator will prefer Cherished Keepsake, anyone with "discard" written on their investigator could be better off with Moonstone, and anyone exploiting "fail-to-win" will definitely do better with Rabbit's Foot. On higher difficulties, scenarios demand you put work into completing them too quickly to mess around with such uncertain and slow payoff from your assets.

I will end on a positive note to praise the flavor of this card. Rex Murphy has such bad luck drawing so many Curses that he prays to his "lucky" Token of Faith all the harder. I guess that's why they went for the subtly not so Blessed artwork for this card and no Blessed trait despite the effect, given the man is literally cursed. Also Rex is an investigator who doesn't have access to Keep Faith due to it being Fortune-traited, so there is at least one deck where you are forced to pick this before Keep Faith!

Trinity_ · 182
I think it’s hard to say whether a blessing or curse triggered card is useful without knowing every card that’s coming out for it. Four player, assuming you get this early, you can pair it with things like false covenant to launder curses into blessings. And if you know curses won’t be a huge problem for your team, you can accelerate everyone’s decks with copies of tempt fate. There’s probably no reason to run a survivor who focuses blessing without keep faith. But this token it’s a lot of fun for Wendy, if you take relic Hunter and this you can regularly play Faustian bargain over and over again. — MrGoldbee · 1220 12/4/20
To be clear, I am not rallying against Token of Faith on the ground of Curse or Bless token synergy being too weak, and you are absolutely right that more cards may make it more powerful. Even if Bless tokens are great, and there are enough Curses to make Token of Faith work, Keep Faith is just a much faster payoff. That is the crux of the problem, not the Bless or Curse token synergy itself or there not being enough cards for them yet. — Trinity_ · 182 12/5/20