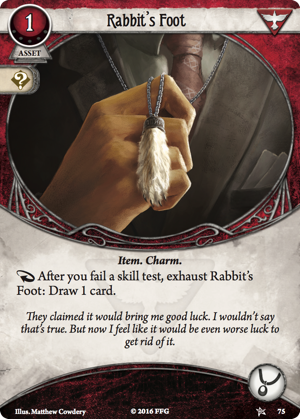 Sounds weird, but this tag is better on easy/standard difficulty than on hard/expert. Sure, the ability triggers more often on tougher skill tests, but the best strategy on a higher difficulty is to do everything you can to minimize the number of skill tests you attempt, or make them auto-successes, with e.g. Flashlight or Will to Survive. When we do attempt skill tests, we want to boost them with sufficient skill cards that we'll actually pass them. So Rabbit's Foot is just going to go a long way to pay off, if it ever does.

Rabbits foot is cool in the right circumstance.

This is a nice side-bonus but this is not actually the thing that makes this card useful.

Again, nice interaction, but you usually only play with "Look what I found!" or at best two of the three cards, setting up just 2-4 (combo dependent) triggers with Rabbit's Foot is'nt a viable plan.

This here is the real reason why you bring a Rabbit's Foot in a deck. The faction is good at turning near-losses into measurable success, and very good at conserving resources while doing so. Having Rabbit's Foot in play lets you make a call like "I could commit a Perception on this investigate check, or I could bank on drawing a good token and not waste the action since I get a card if I fail". Quite often an character will spend several actions to evade an enemy and not bother committing anything to the tests, again a good circumstance for Rabbit's Foot.

Using Rabbit's Foot in this way basically conserves your actions, now you will spend less actions drawing for cards, you'll get those cards while testing your luck at progressing the scenario. Keep in mind that even if you DO get lucky, net the successful evade / investigate / Parlay / Whatever, Rabbit's Foot is the card that instigated the Win/Win scenario and thus is the card responsible for netting you the successful check. This is why Rabbit's Foot can actually be a fantastic card even if you don't actually trigger the card draw.

When you put all the elements together:

TL:DR, despite the card text, Rabbit's Foot is actually best used as a card that conserves actions. If all you want is card draw then go check out Pickpocketing, Lucky Cigarette Case or just a neutral skill card.

Tsuruki23 · 2330
The strategy of taking unlikely-to-succeed tests and banking on either a success or a Rabbit's Foot draw becomes very bad on Hard/Expert. The special token effects mean this approach will be very, very unappealing. — CaiusDrewart · 2794 8/27/18
To be more specific, special tokens often have side effects when you fail a test like adding doom, dealing damage/horror,... However removing these tokens with "sealing" works very well in multiplayer. — Django · 4305 8/27/18
I hate this analysis vehemently. Card draw and test successes are not interchangeable things, if you’re drawing cards while there are clues to be gathered or enemies to fight then it’s because you’re gambling for a solution to an immediate problem. ‘Turning failures into card draw’ is already not a compelling use of rabbits foot, ‘turning card draw into an occasional test success’ is much much worse. — Difrakt · 1167 8/27/18
1

This card is so essential in Stella they even gave her an upgrade for it.

When I’m playing as the postmaster, this is worth keeping in your opening hand unless you’re really driving hard for your chainsaw or an upgraded ally. One extra card for almost every turn of the game, and it’s especially fun when treacheries make you discard your hand. Even better paired with Labranche, to commit cards, get new ones, then get new ones.

MrGoldbee · 1303
The upgrade is from Return to Night of the Zealot, predating Stella by quite a bit. It is nice that the upgrade (and this card) finally found a more powerful home in Stella Clark builds. — Soul_Turtle · 96 6/14/21
0

This is a fine specialty card, but not a great general purpose card. The problem I have with this is that in general, the goal of Arkham Horror is to find a way to rarely fail skill checks, which means this card will rarely activate. Frequently failing skill checks is a good way to lose the game. Now, the cost of this card is fairly low, that isn't really the limiting factor. The limiting factor is that this costs an accessory slot, and there are many other good choices for that slot. I think this is a reasonable card for most characters to play if they weren’t planning on using the slot for anything else, but I tend to find that most characters have other things they really want in that accessory slot, and this item isn't really competitive with them.

If you have designed your deck to intentionally produce a lot of skill failures that will trigger this, Rabbit’s Foot is a fine specialty card to put in your deck.

ChristopherA · 96
I think rabbit's foot may be the best card in all of arkham because it helps you justify only being a little up on unimportant tests, like if you are going to pass 60% of tests on base stats then 60% of the time you are wasting commits, rabbits foot says "until you fail a test why bother committing, drawing cards is a decent compromise for failure" and if you never ever trigger it you have wasted 1 accessory slot and 1 resource and won the game trivially. — Zerogrim · 260 6/13/21
@Zerogrim You’ve also wasted 1 card and 1 action. That said, I agree that the card is good. The accessory slot is more competitive now than it used to be, but you WILL fail some tests in a scenario, even if you aren’t a fail-to-win deck. Especially if you are a survivor. At its cost, it only needs to trigger 3 times to ‘repay’ itself. And it’s a wild pitch, so even if it’s drawn late or in duplicate, it’s pretty useful. — Death by Chocolate · 1230 6/13/21
It's neither the best card in the game nor a fine specialty card. It's a good card that not all investigators want but most would benefit from in some capacity. Regardless of how you set up your deck, you can usually expect to fail some tests. Some investigators are more conducive to that than others- Preston Fairmont can expect to fail virtually any treachery he draws and therefore RF becomes a very reliable way to keep his hand filled. Obviously it works as a real specialty card in Stella where you intentionally fail, but even outside of that I've had good success using this card in Yorick, Silas, early Calvin, and even Rita. The fact is you will fail tests, so what RF offers is a way to soften the tempo loss of failed tests, and it does so very cheaply. Combo with fail cards like Look What I Found (remembering that most Survivors have subpar intellect), or cards that intentionally draw failure like Drawing Thin. Drawing lots of cards is usually pretty good, and while RF may never be as reliable of an engine for as many investigators as Lucky Cigarette Case, it's still a solid pick and one I carefully consider anytime I build a deck. — StyxTBeuford · 12739 6/14/21
One might argue failure is inevitable with this game, you may as well benefit from it. — LaRoix · 1607 6/16/21
You will naturally fail a test every few turns, but that has to happen 4 times to get a net advantage over the initial cost of playing the card. While that will happen if you play this card early, in my experience it takes quite a long time, and there is usually some other accessory with more punch and tempo. — ChristopherA · 96 7/26/21