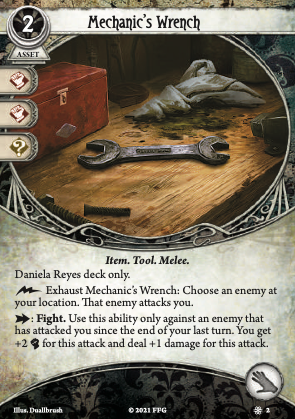 Notably, Mechanic's Wrench does NOT have the Weapon trait, so no finding it with Prepared for the Worst/enchanting it/etc.

anaphysik · 67
If you're struggling to fill 200 characters, you could try saying something meaningful, or not bothering. — SSW · 167 11/6/21
For instance, "However, as it's still an item you can still make use of the much better searchers Backpack and Tetsuo Mori, or attach something like Reliable to it." — SSW · 167 11/6/21
I think posts like these are a good argument as to why each card page on arkhamdb needs a comment section for the card itself, so that sub-200 reviews can be comments instead. — snacc · 529 11/22/21
4

Read the full card before you get an opinion. Because you don’t have to use that ability if the enemy attacked you last turn. That hunter made a huge mistake coming to you, and now you’re going to bash its head in. Consider it at a cheaper, more specialized machete that pairs especially well with your power and level zero guard dog.

MrGoldbee · 1219
Thanks for this, I definitely missed the timing subtlety here that makes this effective vs. hunters from the prior round. — HanoverFist · 482 9/25/21
I still don’t understand how this weapon works — Aslan_IFLY · 1 10/20/21
Did the enemy attack you recently? Cool. You can use the wrench to attack that enemy. — Darthcaboose · 231 11/5/21
Enchant weapon cannot be used on this card as it is not a weapon. I too don’t understand how o use this card properly. Is it just that if you were attacked in the enemy phase, you can use the Fight action of the wrench on your next turn, since you have been attacked since your last turn? The lightning bolt would allow you to have an enemy spawned during the mythos phase, attack you, but then you would have exhausted the wrench and couldn’t use the fight action on the wrench. — 2DotsontheI · 1 11/6/21
The fight action on the wrench does not require exhausting it as part of the cost, so you can use the fight action even if the wrench is exhausted. — Frost · 201 11/15/21
The entire point of the fast trigger on the wrench is to let you use Daniella's reaction trigger and the Wrench's action trigger later that turn. The action trigger doesn't exhaust the wrench or check if it's exhausted, so the most straightforward way of using the wrench is to exhaust it, deal 1 damage back, then attack however many times you need to in the same turn, to relatively efficiently kill any odd-health enemy. — Thatwasademo · 42 3/14/22