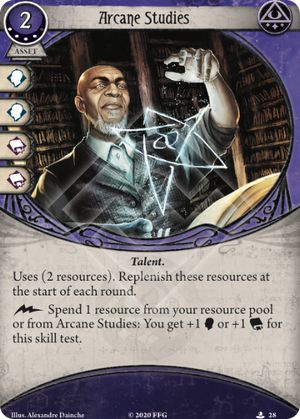 Slotless reoccurring skill boosts are generally amazing, and this would be no exception ... if it weren't for the fact that Recall the Future is half the XP cost and only triggers when you need it. There are two upsides to this card vs Recall: the first is that Recall only covers one "out of range" token, while this is a normal skill boost, but I think half a Lucky! is still better than a Guts; the second is that after you use the two resources off of it you're left with an Arcane Studies (0), but to be honest I just haven't liked any of that cycle since the cardpool got big enough to not need filler cards.

Thatwasademo · 42
Fair argument, but RtF also a) exhausts and b) involves a guessing game which makes it most effective in a subset of Mystics. It’s a good card, but it requires more support than this one to really shine. — LivefromBenefitSt · 882 9/15/20
Nah, recall works incredibly similarly even without support, as going up by +2 is not dissimilar to just Recalling the worst token in the bag, though it depends on how far up a test you are. I do agree generally that Recall, for the price, is a better pick. — StyxTBeuford · 12683 9/15/20
Recall the Future only exhausts if you ‘guess’ correctly. I.e. you hit the token it is relevant for. It’s not really a guessing game, but a risk mitigation game. — Death by Chocolate · 1105 9/15/20
The point is that Recall the Future gives you a +2 boost to a single test per Round. Arcane Studies can give you +2 to one test, +1 to two tests, or as many tests as you might have resources for. Also, Arcane Studies always "goes off;" there is no chance of it failing. I like Recall the Future and had some good fun with it in a Chaos Bag Jim deck that rocked Carcosa, but I think the two cards exist in different design spaces and aren't really in competition with each other (except in the way that all cards are in competition for limited deck space. — LivefromBenefitSt · 882 9/15/20
You have to also keep in mind what DbC is saying- Recall is reactive, it only works when you need it. With skill boosters, you might waste the boost if you draw a good token. You often spend 2 just to ensure yourself passing against the worst token, which often doesnt get pulled. — StyxTBeuford · 12683 9/15/20
I wouldn't say there's no chance of Arcane Studies failing, at least in any sense that there's a chance of Recall the Future failing -- there's always some threshold skill value you're looking to hit, usually the test's difficulty but sometimes a little above or below, and if you draw a token that meant you would have been above that threshold without spending for the boost then it's exactly as though you didn't get it. (And likewise, if you draw the autofail or any other token bad enough that the boost doesn't put you above the *lowest* value you were looking to hit, but that's less likely most of the time you're using any sort of boost) The difference being that for this card, you already spent the resources (or "resources"), but for Recall missing means it's still ready. — Thatwasademo · 42 9/15/20
Recall the Future can fail to "go off" if you have more than one token that will cause you to fail by 2 or less and you pick the wrong token. It's still ready, and it can be used on all tests, which are both points in its favor, but I think the two cards exist in such different design spaces that saying one is better than the other is a little self defeating. Different Decks have different priorities, after all. Probably the biggest drawback to Arcane Studies is that Mystics traditionally have resource crunches, making "pay to pass" more difficult. — LivefromBenefitSt · 882 9/16/20
Realistically you’re probably committing on a RtF test also, you just commit less since RtF makes up the difference to ensure success barring autofail. The same is probably true for Arcane Studies- you will commit and spend the resources off of it. — StyxTBeuford · 12683 9/16/20
In other words you can usually ensure that only one non autofail token is the issue and use Recall for that. — StyxTBeuford · 12683 9/16/20
There is another advantage of this card, albeit only for Diana: it synergies with "Well Prepared". Granted, you get that also from the level 2 version. But if you put that into your deck, you are better off with upgrading it, than using additional deck slots and play action for the other card. — Susumu · 206 12/7/20
1

4XP is a lot, but I like this suite of card designs. Recurring credits were a definite thing in Netrunner, and they are just as good here. Getting a +2 for an Investigation, or boosting almost any spell by +2 once a turn is pretty nice, and this will help with most of the Parlay tests that come up in scenarios. And, of course, if there is some ridiculously high test, you can always spend resources on it. It's gravy that it refills at the beginning of the Round, so it's available for Treachery defense.

As an upgrade to the regular Arcane Studies, this is a rather impressive and really cool upgrade, turning a card that occasionally gives a bonus when you have extra money, to a card which gives bonuses all the time. It is impressive enough to consider whether you would want to take it primarily for its free bonuses, even if you would not put the basic version of the card in your deck. For that purpose, the closest other Mystic card to compare it to would seem to be Recall the Future, so here is a comparison:

In general, since it is fairly common for characters not to make many skill checks during a turn, and one of those checks may be more important than the others, I tend to think that (1) outweighs (2) and is a small net advantage for arcane studies. But the difference is not enough to outweigh (5), so it comes down to (3) and (4). Standard spellcasting Mystics don't use combat or agility very much at all, but if you are making a character who does routinely fight with combat or evade with agility, you will want Recall the Future. And if you are tight with money and don't ever expect to use (4), you will also prefer Recall the Future. But otherwise, this is a good solid card, and is worth putting in a deck if you would have been interested in the original version of arcane studies but felt it was not efficient enough to be worthwhile.