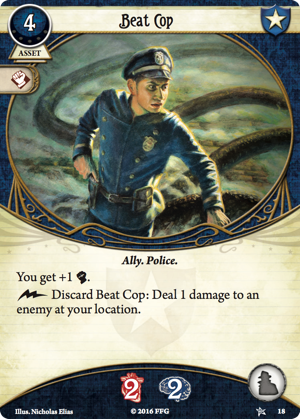 Beat Cop - for when you absolutely want to rough up a witness, accept no substitutes.

It's surprising that there have been no reviews, given that he's such a staple in Guardian decks.

It's major advantage is the +1 , and I did treat it as an auto-include for fighting investigators. That bonus can make a big difference. However, there are some good alternatives.

The discard ability could be useful to get that final point of damage, but it's an expensive card to discard to do that. Beat Cop (2) is better in that regard, as you can just assign damage rather than discard, but it still feels an expensive thing to so. I found that more often I'd sooner use that point of mental and physical damage to soak up a hit.

Alternatives might be Guard Dog, which is much better for dealing damage. I find it more useful for less combative investigators, but with Zoey and Roland (and possibly Skids), I'd sooner they were fighing; the +1 bonus lasts longer.

Also, if you're using experience, Brother Xavier is surprisingly good. You don't get the +1 , but he's an awesome shield, provides +1 (which helps Roland and Skids particularly), and does 2 damage when he takes that final hit.