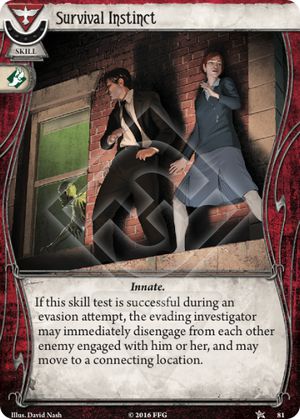 I am a bit biased towards investigator cards with cool artwork, so pardon me if i present Survival Instinct a cut above the general opinion. Many investigators find themselves on the cusp of including this card to their deck and it is often the first to be dropped when upgrades are made.

Short explanation what Survival Instinct does: you commit it during an evasion attempt. If the test is successful, the evading investigator evades and exhausts the enemy he was testing against. Additionally, the investigator may disengage from all other enemies he is engaged to. Then he may move to a connecting location, if the text at that location does not prevent moving there.

With only 1 Agility icon, it does not really shoot your evasion attempt into the stars, so either you push the odds further by adding more cards to the skill test, or your investigator has a high Agility base value anyway.

Survival Instinct has several strong competitors with similiar effects. And this is the important point about it: each other card has it's own desirable effect, but as most investigators hate to leave their position or estimate evading as a flimsiness, they are reluctant to adapt the means to the end.

I would like to enforce to choose your means according to the situations you are most likely to face. If you don't know what to expect in a scenario, Manual Dexterity and Bait and Switch probably provide a better service than Survival Instinct. But the more enemies surround you, the more valuable Survival Instinct becomes. If there are alternate locations available, that is. If the scenario traps you within a small scope of locations, like in The Devourer Below, the basic version of Survival Instinct(0) utterly fails. Cunning Distraction or the upgrade Survival Instinct(2) is there for you then.

Especially on a solo trip, the encounter deck sometimes adds enemies at the most objectionable times. Survival Instinct gives you some tremendous respite in such situations.