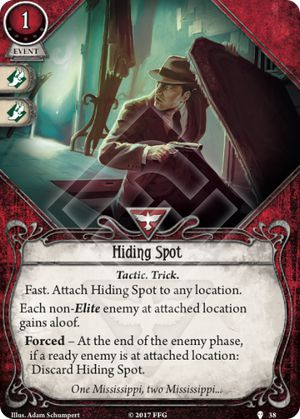 When Hiding Spot would expire at the End of the Enemy Phase as a result of a ready enemy being at an attached location, Hiding Spot would be discarded straight to the top of the discard pile. There's a Player Action window at the start of the Upkeep Phase that allows Wendy to use the Amulet's ability to play Hiding Spot out again to a location.

Unfortunately, that small gap in time allows any enemies at a location to immediately engage with any Investigators there (and playing Hiding Spot does not cause them to dis-engage, they just gain Aloof). However, playing Hiding Spot to the same location will help keep out MORE enemies drawn from the Encounter Deck, while your team deals with the enemies currently on them.

Darthcaboose · 231
Whoops, by "start of the Mythos Phase", I actually meant "start of the Upkeep Phase" which is right after the Enemy Phase. — Darthcaboose · 231 10/25/17
As of FAQ 1.9 Wendy's Amulet has been Errataed and that trick no longer works. Now the Forced effect triggers even when your events are discarded from play at any time. You can therefore no longer infinitely recur hiding spot. — Killbray · 3372 9/3/21
5

This card combines very well with an Evade strategy. Especially in games with 3+ players enemies that you do not want to kill for whatever reasons will pile up on locations and will sometimes have to be evaded again and again while you are waiting for some crucial clues to be collected. Playing Hiding Spot on these locations will prevent the enemies from re-engaging in the upkeep phase and let the investigators use their actions for something else.

If a non-Elite enemy would spawn at a location that has Hiding Spot attached to it, the enemy gains aloof as they are going through the process of spawning, and thus the rules for “aloof” kick in ("When an aloof enemy spawns, it spawns unengaged,” RR page 4). As a result, the enemy will spawn unengaged.

sacrelicious2 · 40
But can you play it when an enemy is spawining, or must you play it beforehand? — Tsuruki23 · 2205 9/27/17
the mythos phase does not have a fast player window until after all encounter cards are drawn, so it must be played in the fast window at the end of the upkeep phase. — stetson · 3 9/29/17
Slight correction, but any card drawn that features a test of any sorts triggers a test sequence which DOES feature a fast window. However, if your encounter cards do not feature tests, then there will be no fast window. — Darthcaboose · 231 10/25/17
Actually, I think there may be a loophole for using Hiding Spot during the Mythos Phase. indeed, when each investigator draws 1 encounter card, the 3rd step is to resolve any revelation effects, before spawning ennemies which is only step 4. Revelation effects may trigger tests, opening player windows. In this case, hidding spot could be played during the Mythos phase. — Alleria · 105 6/12/19
Okay, but those steps are for resolving an individual encounter card, so unless you draw an enemy with a revelation effect that contains a test, you’re still blindly playing the card before you know if a. Insert will actually spawn. (Unless you had scryed it.) — Death by Chocolate · 1105 10/13/20
2

Who wants to take this card?:

This card shines most in the upkeep phase, where it can be played to protect a crucial location or at a location from being tangled up by monsters spawning there. If a squishy needs more time to investigate a location this card will insure that they get that time without the need of a or investigator with high babysitting them. This frees up both actions and turn order for other investigators. Even if the investigator does not get a chance to move he will get an entire turn without being attacked. As a little bit of a bonus it can serve the same function as dodge against a hunter, but will not prevent said hunter from engaging at the end of the enemy phase.

As a card in a support deck, it can be placed at any location, even ones that have not yet been revealed. Not only does this allow the support range to take care of other investigators across the map, it means that locations that spawn creatures when they are revealed do not result in that creature immediately engaging the investigator that revealed it. Squishy investigators can spearhead into new locations fearlessly(sort of)!

The most fascinating use for this card is how it would pair nicely with cards that grant movement. In decks that make use of shortcut or pathfinder, Rex could conceivably clear a location out from under the noses of a group of non hunters without them even taking notice, bonus points if he can retreat behind a barricade.

Edited for readability and to make it pretty
stetson · 3
Official ruling on Hiding Spot from Matthew Newman regarding enemies spawning on investigator at Hiding Spot location. — sacrelicious2 · 40 9/26/17
If a non-Elite enemy would spawn at a location that has Hiding Spot attached to it, the enemy gains aloof as they are going through the process of spawning, and thus the rules for “aloof” kick in ("When an aloof enemy spawns, it spawns unengaged,” RR page 4). As a result, the enemy will spawn unengaged. — sacrelicious2 · 40 9/26/17
As further clarification this card will not do anything to break up investigators that are already engaged with an enemy, it must be used preemptively either in the expectation that the mythos phase will spawn creatures at the worst possible time/before moving into an enemy occupied location. — stetson · 3 9/27/17
I'm pretty sure you can't play it during the Upkeep phase? Fast events without specific timing window rules can only be played during a player's turn. — Winged · 1 12/28/17
Actually, only fast assets have the assumed ‘only during a player’s turn. Otherwise fast cards without specified Timing windows can be played during any Free Trigger Window. — Death by Chocolate · 1105 2/8/19
0

I am writing my first review here as I want to check that idea:

That card to me could do wonder on Zoey Samaras with a type of deck that wants her to collect most enemies possible, for example with "Let me handle this!", On the Hunt, Taunt (and Upgrade 1/Upgrade 2).

Let's say that in this situation, Zoey gets around 3 enemies on her, attacks a full round, plays Hiding Spot so performing 3 Dodge at once.

The cherry on the cake, she gets automatically engaged again, bringing her 3 resources or 2 resources and 1 test-free damage with Zoey's Cross

And the more enemies she has on her, the merrier!

Valentin1331 · 8348
That doesn't work, enemies won't disengage you just cause they gain aloof, you'd need a different way to achieve that, like warning shot (though hunters would come to you again in enemy phase an attack). — Django · 4108 2/6/21
Indeed, having aloof doesn't cause enemies to disengage from you, otherwise you would never be able to hurt aloof enemies as they would just disengage as soon as you engage them. But nice thinking — NarkasisBroon · 3 2/6/21
so instead I need to replace that one card with Cunning Distraction to have the effect that I am looking for... for much more resource, which would still repay fine when for example to 3 enemies re-engage while dodging all attacks. — Valentin1331 · 8348 2/8/21
Yes, Cunning Distraction would be better and mostly pay for itself when enemies re engage. — Time4Tiddy · 188 2/8/21