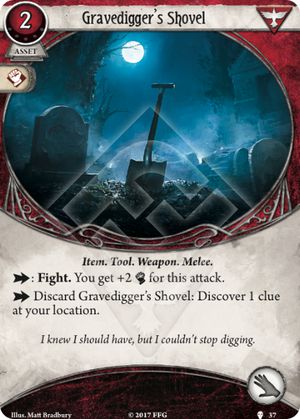 MMMh.... a shovel. Uh, it is owned by someone, a Gravedigger. Uh oh, this new handsome's job is burying the dead. Following this logical chain William Yorick's favorite assets are Gravedigger's Shovel and Lantern.

I daresay that this beautiful picture is only skin-deep. Imagine Mr. Yorick carrying both, shovel and lantern. He fights with the shovel and uses the lantern to gather clues. Each time he defeats an enemy, he just forfeits his reaction ability? Or is he meant to throw the lantern into the enemy's face at first sight, then charge with his shovel, hack away and lastly retrieve the lantern for 2 resources? Does it sound better if William Yorick had both his shovels to his disposal? He would be well advised to discard the first shovel to discover a clue, then equip the second shovel. With it, he could easily beat an enemy, trigger his special ability... oh, dang! The lantern blocks his other hand! To get this combo running, Yorick would have to keep his second hand free all the time or draw his Bandolier early. Even then, it still seems costly to me: 2 resources for each 1 clue gained! Let us face the truth, Mr. Yorick is a dumbass. He did not pass as an actor, nor does he have a detective's training. He is really good at tanking/fighting and recycling assets. But this review is not about William Yorick, it is meant to demonstrate how intricate Gravedigger's shovel's second ability works under the best of circumstances (continuous, action-free retrieval).

As a conclusion, use the shovel mainly as a weapon. The +2 is a strong bonus for fighters (hard/expert mode) and weaklings (easy/normal mode) alike. As a one-handed weapon, you can pack complementary assets. And, if a treachery raises the shroud value of your location into the sky, you can trigger the emergency button and discard the shovel to auto-access a clue nonetheless.

I should stress that the auto-success is invaluable if you play in expert mode, where tempo is more important than anything else!

Synisill · 725
Also of note, it has a nice combo with Vicious Blow(2) - +2 combat is good, and you're liking to get the succeeds by 2 bonus from Vicious Blow, so 3 damage! Unfortunately, it highlights the problem of the shovel as a weapon - it's slow, due to lack of damage bonus. — AndyB · 785 10/2/17
I'll always consider a card with the ability for an 'auto success' in this game. Even Kukri. I'm going to test it in Askcan Pete as a clue getter first, alternative weapon option second. — bigstupidgrin · 74 3/21/18