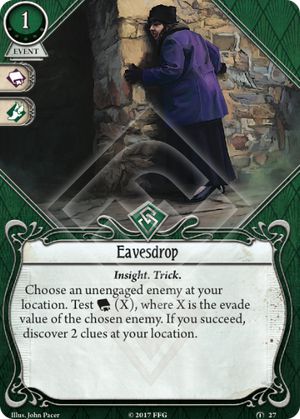 Agility has perennially been one of the hardest skills to leverage usefully in gameplay, this card is one of several new cards printed that fixes that issue somewhat.

Since the game first released we've had cards that turn a skill into another, Rite of Seeking for example turns your into and "I've got a plan!" turns into . The only initial options to do that with were Backstab and Sneak Attack, and both of those were for combat only! Well since then we've gotten Lockpicks and Cheap Shot, an upgraded Sneak Attack and not much else. I.E. four different ways to turn agility into and just one way to turn it into .

So, Eavesdrop, this is the second card ever to turn into . players rejoice! Oh and Wendy Adams too!

Oh wait, the skill check used to trigger your net benefit is an check?! So the plan is to: Use your High stat to encounter and evade an enemy, this shouldn't be an issue for a Rouge, and then you use your, probably average 3, stat to try and net two clues? Two actions for two clues AND you spend a card AND you're still hinging all of this on a stat that isn't even your major stat?

So, when on earth is this useful? It's bad to review a card in vacuum like this. Obviously there can be a large difference between location shroud value and enemy evade value, pulling 2 clues from a Shroud 5 spot for example is pretty good, assuming that the evade value is pretty low. More importantly perhaps is the fact that you ARE playing so perhaps you can double up on the clue mayhem with a Double or Nothing?

I tried this card a bit with proxies, I tried it on "Skids" O'Toole and on Finn Edwards, the latter gets his free evades so that makes this infinitely better for Finn Edwards but even so, seriously consider taking just a humble Flashlight rather then this card, or take both and have them supplement each other.

If you take 2 Flashlights, 2 Eavesdrops and 2 Perceptions then you've got yourself a decent Clue-specialized package for level 0, supplement this with out-of faction cards as is appropriate ("Skids" O'Toole can gather Evidence! and Finn Edwards can be very clue efficient with "Look what I found!" and/or any number of different cards). As you gain XP drop the Eavesdrops for Lockpicks and hoover clue's like a Faux , especiially if your Investigators name is Finn Edwards.

This card came to mind when looking at Crafty from the Edge of the Earth pack but suffers from the continuing issue that one almost needs an Aloof enemy to make this work. The ridiculous thought ocurred that one could eavesdrop on everyone's favourite Aloof enemy from the Dunwich Legacy for clues - The Whipporwill

Thankfully it seems FFG had future proofed the card design of this venerable horror by making the darn things Evade 4 (effectively 5 with the -1 that the Whipporwill applies) which is not something i'd been able to recall due to always wanting to butcher the darned things or run away rather than evade them.

Still - it's nice to know that, even in a game of horrors beyond the wit of man and non-euclidean geometry to bend the mind, it is an awful lot of effort to get clues out of chirping birds even if you are very crafty indeed!

So my group has our own small tabboo list that changes cards which literally never see play at our table, and this card is on it. Doesn't really make sense to have a card that you paid money to own but it has never been played at your table, so we changed it so that you can choose to test INT or AGI for this test. It was a small change but we figured it would be a bit better and some investigators might actually take it, like "Skids" O'Toole or Rita Young. Even so, it was played in Rita, but was cut out soon for Pilfer. It worked pretty well at the start of the campaign, and you all know how Rita needs all the help she can get as she is one of the weakest investigators around. So if you want, change it like we did, and you might actually play it once a year or so

Blood&gore · 84
I know some cards simply feel underwhelming, but, IMHO, most are simply looking for the right deck. I've used Eavesdrop v successfully in Monterey Jack decks. It is even more powerful in multiplayer when you have an evading gator in the team (Daniela, Rita, Trish, etc) https://arkhamdb.com/decklist/view/35191/monterey-jack-my-definitive-solo-deck-1.0 — acotgreave · 364 5/24/22
Meeeeh i understand your point, but waiting 3 years or so to put a card from your binder into 1 or 2 decks and then again put it back in is pretty underwhelming, so i would rather have this card sometimes see play — Blood&gore · 84 5/25/22
:-) — acotgreave · 364 5/25/22
In my opinion the option to use agility would make this card to good to ignore it as an evader. 2 clues for 1 Ressource and often an easier check is hard to beat (compare with pilfer 3 clues for 4 ressources). I would add some costs or probably a penalty for bad stuff tokens like Shrivelling. — Tharzax · 1 5/25/22
I do the same thing of "personal taboo list" to try to make underpowered cards more usable (e.g. Oops(2) is chained at -2, effectively replacing Oops(0)). This is an interesting idea and I'll have to think about it. — anaphysik · 73 5/27/22
1

For the longest time, the Rogues didn't have any cards that could "cheat out" clues--that is, get them without having to pass an investigate check. While other classes had such staples as Evidence!, "Look what I found!", Drawn to the Flame, and Working a Hunch, Rogues couldn't get clues in any other way than passing checks. This was mighty inconvenient.

And not only did Rogues have no way to get clues without passing checks--they didn't have any level 0 cards aimed at helping them pass those checks, either! (I refuse to count Dario El-Amin as a level 0 card that helps with investigation. He just isn't. Sorry.)

Now, enter Eavesdrop, our first level 0 Rogue investigation card (again, not counting Dario). But it falls a little flat, I think. It is just a little weak compared to the "discover 2 clues" cards that other factions get (you can add Scene of the Crime to the list, now.) The main problem is that you still have to pass an Intellect test. To do that on high levels, you'll need to boost considerably. Either you accept a high chance of a wasted action, card, and resource because you failed the test, or you have to dedicate way more resources than what other classes are putting in to get the 2 clues.

And that's not to mention the problem of having an unengaged enemy available. You'll probably have to evade to make that happen. Now perhaps you wanted to evade the enemy anyway (though this won't always be true), in which case we shouldn't count the action and skill test (or more) needed to do that as part of the total cost of the card. But it's still an inconvenient requirement, one that makes this card far less reliable than its competition in other factions.

Obviously, this is most playable for Finn, who gets that free evade and combines high Intellect and Agility. It's a decent choice for him to add some tempo to his clue gathering at the expense of some risk. For the other Rogues--the ones who really could have used some cluefinding help--this probably isn't the answer. They'll still need to use either XP cards or cards from other factions to solve their cluefinding issues.

This card reinforces the trend that Rogues perform better at lower levels. My complaint about still having to pass an Intellect test is perhaps not such a big deal on Easy or Standard. But it sharply limits this card on Expert (at least for people not named Finn.)

CaiusDrewart · 2687
This is just a card for Finn. Sometimes, when new investigators are released, FFG also releases cards that work only with those investigators along them. Take True Grit for example. Would you use it on any investigator other than Mark Harrigan?? I don't think so. — matt88 · 2534 7/7/18
I like True Grit in my Yorick deck, actually. — crymoricus · 225 1/11/19
1

Has anyone suggested an Eavesdrop with Anatomical Diagrams? That card is much more playable in this context. And Logical Reasoning for keeping your horror in check. This is obviously best used with Finn. You might also EAVESdrop from a Stealthy position