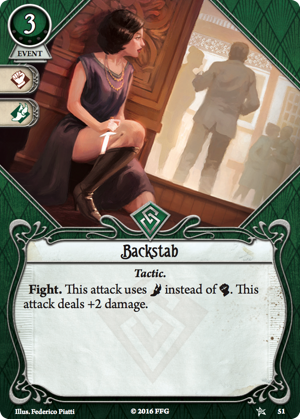 Backstab is a conundrum, too. Thematically, it belongs to the rogue class like no other card, while game mechanics-wise it is barely seen in rogue decks. But i am happy to announce that with the appearance of Madame Rousseau, things could change in the future.

Backstab best suits investigators with a low combat and a high agility base.

Yes! Of course you got the same notion: i am speaking of 'my girl', Wendy. Backstab is one of the very few cards that give her reliable access to additional damage. Fire Axe is expensive, Sneak Attack costs two actions and the bat probably breaks. This, and the fact that Pete players often import Backstab into their Dark Horse builds, makes Backstab feel like a red card in disguise.

A ridiculous combo possibility exists with Double or Nothing, if you manage to pump agility up that high. As a rule of thumb, +2 to +4 over the skill check difficulty on standard difficulty, so roundabout 10 to 12 agility. Unlikely, one can pull this off alone. It is something you will definitely need another investigator to help out with, since realistically you will be unable go accumulate enough cards (Unexpected Courage/Manual Dexterity/Rise to the Occasion/Wendy's Amulet) for this ideal moment. Or.... brooding over succeeding skill tests - it should be pretty smart to just exile Stroke of Luck as last card in a three-card-combo.

For the sake of clarity it should be noted that Backstab makes you test your agility skill instead of your combat skill against the enemy's combat value. This implies that cards like Vicious Blow are not allowed to be commited to the skill test, as the rulebook states [RR V1.0, page 26, section 'skill test timing', ST.2]: "The investigator performing the skill test may commit any number of cards with an appropriate skill icon from his or her hand to this test. [..] Cards that lack an appropriate skill icon may not be committed to a skill test. [..]"

This card doesn't have many reviews to it, but it seems to me that now that we have Monterey Jack, with his high agility but low, low combat, this card feels suited to his playstyle. Three cost for one fight action is pretty tough, but the ability to deal 3 damage with his base of 5 agility often can take out a non-elite and makes it feel worth trying out.

Giffdev · 57
Monterey Jack could play Sleuth and so get free resources and/or skill boosts for Grisly totem, Occult lexicon, Prophesia, "I've got a plan !", Practice makes perfect, Followed, Sneak attack, ... So a lot of uses ! — AlexP · 225 12/12/21
Monterey Jack also has money to burn which makes the 3 cost much less an issue, seen someone else use pilfer to great effect and think backstab would be equally effective in jack. — Zerogrim · 262 12/13/21