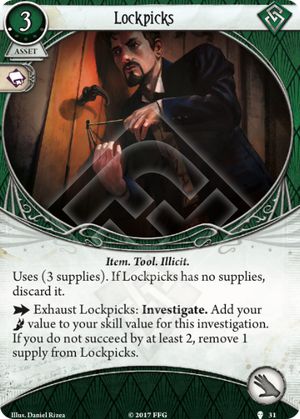 Cthulhu forgive me my sins, but this must be said:

Move over Flashlight! there's a new king in town. Lockpicks allow Rogues to investigate locations at an insane base skill value of + (or other skill value, in certain cases). This is a really nice benefit, but to really illustrate the point consider the following comparison:

Flashlight is a strongly considered item in Expert because of the abundance of high-negative number modifiers that may pop up. While flashlight doesn't modify your base number significantly, for 2 shroud (or less) locations using flashlight lets you auto-succeed any non- token pull. If Wendy or Skids use lockpicks on a two-shroud location they are also almost guaranteed to succeed, bar a total modifier that is greater than -5!

Of course there are a couple downsides: Lockpicks is marginally more expensive at 3r and 1exp instead of 2r, and flashlight doesn't exhaust allowing you to drain a location very quickly in a low-stress turn. On the upside, however, lockpicks can be used almost indefinitely, depending on how often you're likely to fall below the succeed by 2 requirement. At a minimum they have as many charges as do flashlight, and in the off case you are investigating a non- location you can always use to boost lockpicks using Streetwise.

All-in-all an exceptionally good card who's sole real downside is that it cannot be used consecutively in one turn. While power-investigate turns do happen, with some intelligent forethought these situations can be minimized. A very unique and powerful addition to the Rogue card pool, and recommended as a 2x early upgrade.

Don't get me wrong, Lockpicks are good. It's probably a good idea to buy them as Wendy, Sefina, and "Skids", and even Jenny might consider them.

They're a very welcome addition to the card pool, as the Rogue class previously had a severe dearth of investigation options. With Lockpicks, they at least have something, even if they do have to spend XP for it.

However, a couple things must be said against them. Lockpicks are both expensive and slow. The fact that they exhaust every time you use them is a really hurts. In solo play it's not quite so big a deal as lots of locations only have one clue. But if you're playing with, say, three players and you need to clear a 6-clue location? The once-per-turn limit is going to make Lockpicks extremely slow.

Once you hit Expert difficulty, Lockpick's charges will start running out, but on lower difficulties I'd imagine they stay in play for quite a long time.

Since Lockpicks can get you a very large modifier, it can be nice to use Double or Nothing with them as a kind of janky Deduction. This can help alleviate the tempo issue I mentioned earlier.

CaiusDrewart · 2815
You're right this card is way better in solo. However, if you're playing multiplayer, the Rogue investigator's role probably won't be to gather clue. Some other investigator will certainly do it better, and a 6 clue location is easily emptied by the Seekers — banania · 388 3/26/18
Lockpicks are a bit unique in how their use shifts between solo and multiplayer, but their power is still quite high in both: Solo, they allow you to investigate reliably as a rogue. Multiplayer, they let you support the clue hound or proc Burglary and Scavenging regularly. The insanely high skill value lets you combo with all kinds of things, including double or nothing. — SGPrometheus · 688 3/28/18
SGPrometheus they can't proc Burglary as Lockpicks requires you to use an ability on the card. Lockpicks and Burglary are two different action Abilities. — matt88 · 2656 5/9/18
Oh yeah, whoops. Still, they do combo with those other things. — SGPrometheus · 688 6/6/18
It's also probably the best way for most rogues to activate stuff like Quick Thinking and Lucky Cigarette Case — Zinjanthropus · 212 5/26/20
Yes, this is true. This review was written before the Rogue "oversucceed" archetype really got there. (I think we pretty much only had Quick Thinking and Double or Nothing at that point.) Lockpicks is great. It is still true that it is a little too slow to do all of the investigation work for a 3+ player faction, but regardless, one heavily boosted investigate per round is really valuable. — CaiusDrewart · 2815 2/22/21
2

This question is related to the FAQ question above: If I use Lockpicks, can I commit an agility icon card to the test, even if includes no intellect icons?

Apparently, I need 200 characters. Did I reach it yet?

Phelpsb83 · 177
Step 2 of Skill Test Timing says you can only commit cards with icons matching the skill tested, so no. Lockpicks adds your agility to the INT test, but does not change the tested skill. This also means that cards with INT and AGI icons only add their INT icons. — Django · 4427 1/23/20
Thanks for the response Django. This card now gets added to long list of cards I've been playing wrong...! — acotgreave · 519 1/23/20
I was playing cards like Slip Away and Spectral Blade wrong too, then. Thanks! — Yenreb · 15 1/24/20
2

This would allow rogue to get clue recursively.

If investigating Arkham Woods, I assume Lockpicks would essentially double your skill value for the investigation test? Admittedly for this location it’s overkill with most Rogues’ evade values, but it’s useful for clarification.

RollanPyro · 90
Yup! You add it again. — MrGoldbee · 1314 11/13/20
Thanks for the confirmation! I noted the wording of “skill value” and thought I’d better check. — RollanPyro · 90 11/13/20
i wouldn't necessarily say it's overkill to be able to test 8 vs 2. on hard or expert difficulty 4 vs 2 has a realistisch chance of failure, while 8 vs 2 is still likely to succeed. — PowLee · 13 11/14/20
Lockpicks is one of the best cards in the game imo because of the overkill that it provides. But it should be noted that it can only be used once per round, it loses supplies if you don't have oversuccess and the overkill combos well with other Rogue cards like Lucky Cigarette Case (succeed by 2 and draw a card). — TWWaterfalls · 862 11/14/20
0

I have found a "sour spot" (the opposite of sweet spot) while using this powerful card. It is on investigator with 3 (Skids), with no other gentle boosts available in the deck, and having to work on 2 shroud location with something like 3 clues. Basic investigation with 3 struggles against 2 shroud especially you want to repeatedly succeed, and also using Lockpicks is slow to drain the location since it exhausts. It is like you are given a bazooka but was tasked to kill some birds.

You will have to intentionally find a more difficult location with 1 to make the best use of your action. And therefore replacing starting 2x Flashlight into 2x Lockpicks may not always be a good idea, regarding of flexibility even in Normal difficulty.

5argon · 3272
I think, Lockpicks has two applications. In solo, one clue per round is a good rate. You have to spend actions to move around anyway, so the exhaustion does matter less. In multiplayer, I agree the clueing potential is rather slow. But you get value out of an action per round, where you over succeed by a lot to dig out cards with LCC (3) and potentially trigger other effects. — Susumu · 271 2/16/22