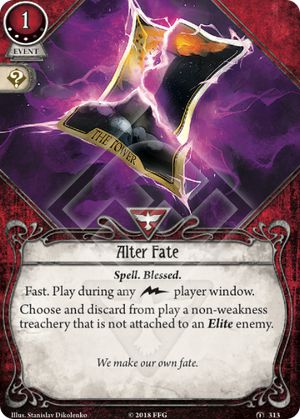 Oh my god this card is amazing.

Whenever I draw this card I swear I can hear Samuel L. Jackson somewhere in the background saying "Motherfucker" with an approving tone.

The sheer amount of garbage that may pile up in any given scenario is crazy, literally like an ever growing headache. Alter Fate is the pill that makes the headache go away, or perhaps cures the cancer outright! In many scenarios this is the card you save Resourceful for in particular.

Admittedly, I don't think a solo player draws persistent gunk at a speed fast enough to warrant Alter Fate, it's a liability when you dont need it and your deck probably requires other, important, level upped mechanics. In two player or three player the amount of gunk goes up and the sheer usefulness of making the gunk go away is stupid good. I did a little check and every single scenario from the release up to the conclusion of Path to Carcosa and start of Forgotten age had at least a couple perfectly viable targets. Every scenario!

One of these days, if you haven't already, once you've slotted your first 8 XP worth of important XP upgrades, try spending you next 6 on a couple of these. They are great.

Forgotten age it can be clutch, but there are less "GOTCHA!" persistent treacheries in this one.

Carcosa has a few good targets, but also an occasional dud scenario. Definitely lower priority due to the deckslot.

Tsuruki23 · 2349
Well, you don't benefit from discarding Spires of Carcosa, due to its own wordings, so practically there is no valid target in Black Stars Rise. The card is definitely campaign-dependent. I find it great in Dunwich and TCU, ok in TFA, and not very good in Carcosa. — ak45 · 415 8/9/19
This card in The Circle Undone. I don't think I need to say anything more than that. — StyxTBeuford · 12744 8/15/19
I will concede that Carcosa has less targets — Tsuruki23 · 2349 8/22/19
I really liked it in TFA with Patrice, because she can play it quite a few times. It also forces you to play it even on minor annoyances, because if you don't you just have to discard it, which means that you end up not having a lot of persistent treacheries in play at all. I feel like when I've taken it in other investigators I just never play it because I'm waiting for the moment where it'll actually win me the game, or whatever. — Zinjanthropus · 212 7/7/20
13

First I just want to say I absolutely love the art on this card, maybe my favourite in the pack. The whole theme of the card is just fantastic all around.

That out the way, I think the most obvious comparison for this card is Logical Reasoning as they are the two cards in the game that can testlessly discard a treachery in play. I think when Alter Fate was revealed a lot of people saw it as a less flexible Logical Reasoning, due to them both being able to discard one of the worst treacheries in the game and Logical Reasoning having the added benefit of horror healing, but I dont think this is entirely fair. Alter Fate is fast, useable outside your turn and doesn't require you to be at the location of the player you're helping. Not to mention there are a fair few pretty nasty non-terror treacheries you can hit.

I think Alter Fate really shines in the second half of Forgotten Age where it can deal with Words of Power, Yithian Presence, Entombed, Creeping Darkness (surprisingly) and Frozen in Fear when you have 2 willpower, all of which can require a significant investment of action or cards to deal with otherwise.

I also think it does a lot of work throughout Dunwich where between Arcane Barrier, Locked Door, Cursed Luck, Beyond the Veil and the campaign's liberal use of the Striking Fear encounter set, every scenario has at least one target and usually several.

Father Mateo can take this card, as it is Blessed, and since its a spell he can dig for it with Arcane Initiate. This is dubiously worthwhile as Mateo has lots to spend exp on and can already take Ward of Protection but it could be interesting in a very supporting control focused build.

William Yorick has only medium values for both agility and willpower, which makes him vulnerable to a lot of the treacheries that Alter Fate is useful against.

Calvin Wright may specifically find it useful for dealing with Curse of Yig and Dreams of R'lyeh which can be brutal for him, as a form of virtual damage that bypasses and soak he has in play, though he can also play Ward of Protection which does a mostly better job.

birdfriender · 217
Think about all this card can do in pallid mask, with all those treacheries like the shadow behind you the pit below or the common obscuring fog... — aurchen · 1 12/29/18
As Spell, Marie can also play this card. In "Guardians of the Abyss", it helps against Dark Sacrifice and Slumber, which only leave play when strength of the abyss is reduced. — Django · 4427 2/17/19
I'm surprised this card doesn't work on the TOWER XVI since it's in the artwork lol — Elecyan · 1 10/30/19