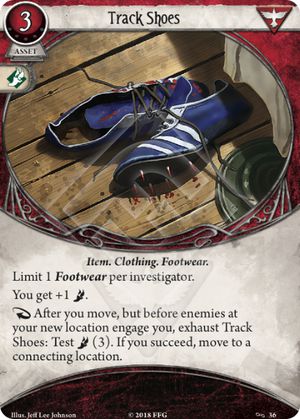 Why are there no foot slots? Don't give me that "adding slots requires rules updates" because we added Tarot slots. I was hoping we wouldn't have any examples of incredibly awkward formatting like this, but here we are.

As for this card it's 3 resources for a permanent stat boost, which is fine. What's good about the reaction is that it doesn't care how many enemies are at your destination, or how hard they would be to evade legitimately, you are probably testing +2 to leave them behind.

It's always nice to have stat boosts that aren't in the already hotly contested ally slot.

Swekyde · 54
It also doesn't care if enemies are there. It's a test for a free. Kv — Myriad · 1106 2/13/19
Move. Damn phone. — Myriad · 1106 2/13/19
As for the slot issue, I think the devs feel like tarot are a great design space in which they want to iterate further, while footwear are generally not compelling/interesting enough to generate any more cards. — SGPrometheus · 569 2/13/19
Yeah, we might end up with three or four footwear cards at the end of the day, but a dozen or more tarot assets. — Carthoris · 25 2/15/19
Imagine how OP this would be if bad tokens didn't include nasty side effects. Still, this might be an auto-include for anybody with high agility. — bigstupidgrin · 78 3/13/19
There is nothing remotely awkward with the wording on this card. — Tilted Libra · 23 6/15/20
Even if they never printed another footware, I think it should have had a slot for thematic consistency. — Skylar114 · 1 2/24/21
I think the point a slot is that you might get more by certain cards. Right now, I believe every slot in the game has at least one card expanding on the number you're allowed (with Anna Kaslow for tarots). I wouldn't expect a card to add footwear slots any time soon ;) — Azriel · 1 4/29/21
15

Track Shoes is an amazing card.

3 resources for an unconditional stat boost is already very good. Combine it with Peter Sylvestre for a +2 to Agility, and Trench Coat for +3 Agility on Evasion attempts. Investigators who are built for evasion will obviously enjoy the passive boost the most: Finn Edwards gets a free evade action to take advantage of it, and Rita Young is good at turning evasion into damage or even extra movement. That's reason 1 to run Track Shoes.

Notice that the reaction ability on Track Shoes doesn't care if there are enemies at the location you move into. It simply initiates the test before any enemy engages with you. Now, if that test succeeds, you move to any location connected to it. Notice also that all reaction abilities without the "Forced" keyword are inherently optional- you may choose to trigger the test. It is possible that you might not want to, for example you may want to move normally first, then move again into a room with lots of enemies, THEN trigger the shoes to move a third time in two actions skipping that room full of enemies you want nothing to do with. That kind of versatility is important, and definitely makes an evasive investigator just that much better at dealing with a clogged board of enemies late in the scenario (happens often in solo for low combat investigators like Wendy Adams). Combine this versatility of movement, this ability to be anywhere you need to be at anytime, with cards like Gravedigger's Shovel and "Look what I found!" to clear clues at the exact location you need to. Combine with Resourceful on a subsequent Track Shoes agility check to successfully recur the aforementioned clue getting cards. The combo potential here is brilliant. That's reason 2 to run Track Shoes.

The icing on this rubber and steel cake is it's a free skill check almost every turn. Drawing Thin, Rabbit's Foot, and Take Heart all love Track Shoes. Pump the difficulty to 5 with the first, have the second in play, and play the third during the check. 4 cards and 2 resources OR 3 cards and 4 resources gained from a test that you probably don't mind failing anyway. Worth noting of course is that you could accidentally succeed, so this strategy is probably more advisable for Calvin Wright (with low stats) and Silas Marsh (with his ability to at least conserve Take Heart if it does succeed) than it is for Rita or Finn, but both Calvin and Silas can have enough evade to eventually make use of the shoes' movement ability if they want to. That's reason 3 to run Track Shoes.

So what have we learned? Track Shoes is great for evasive investigators to evade things better. It's great for solo investigators trying to run away from everything instead of fighting. It's great for positioning the dedicated evader or clue-getter of the group. It can turn one move a turn into a double move if you need it, but if you don't, it turns into card and resource generation almost every turn with the right infrastructure backing it. The only big issue with Track Shoes is that you NEED to move every turn to get any real advantage from its skill test, whether for movement or for economy. And yeah, it's a bit expensive, and yes you can only have one in play. But still, for me this has become an almost auto-include in most Survivor decks, and definitely an auto-include for Finn even without the economy support. Probably the only Survivor who doesn't run this card is William Yorick who would rather fight anyway and needs to succeed at skill checks to take advantage of his ability- he doesn't necessarily throw in the economy cards necessary to make failures into goodies. He also doesn't care much for evasion.

StyxTBeuford · 12524
Can I have two of them in play at the same time and benefit +2 agility? Is It correct? — Fedro · 1 6/13/19
You could, if not for the fact that Track Shoes is footwear and it says limit 1 footwear per investigator. — TheNameWasTaken · 3 6/14/19
And it is a bit of a shame too since it doesn't have the best icons around. But you've got a decent amount of choices for Agility boosting. For example along with Peter Sylvestre you could take Charisma and throw in allies like Cat Burglar or Lola Santiago. Plus there's always Key of Ys. — StyxTBeuford · 12524 6/14/19
And in a faction with Cornered, you don't have to worry about the second one! — mogwen · 224 6/16/19
That is true, Cornered works well with any bad iconed card. — StyxTBeuford · 12524 6/17/19
Can you use the ability on Track Shoes to avoid other effects that trigger when you "enter a location"? I guess my real question is if you use the ability to hop over a location, do you ever actually enter the first location you moved to? (Or do you actually enter the location briefly and only avoid engaging the enemies there?) — Lodan · 1 8/12/19
The effect says “after you move, but before engagement”. You do physically move into a location still, and you have to resolve those effects first before testing the shoes. — StyxTBeuford · 12524 8/13/19
Actually hold on to that thought, as there's a lot of amorphous-ness around when that window actually exists. The general consensus is actually that you can use it to avoid the effects or at least test them after testing Track Shoes. — StyxTBeuford · 12524 8/27/19
Does the "after you move" action only relate to a move action or any move trigger? I'm thinking about cat burglar, survival instinct etc triggers a move , can I use that move to a new location the then test with track shoes and keep on running? — Nimald62 · 1 11/15/19
Any move trigger works. Survival Instinct, Rita's evade reaction ability, shortcut, any of those. — StyxTBeuford · 12524 11/22/19
If you choose to use Track Shoes ability when moving to an unrevealed location, do you still reveal that location if you pass the skill test? — Cro · 13 5/20/20