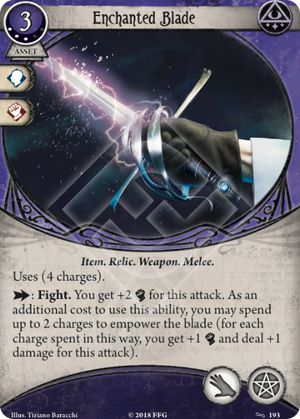 TL:DR: Extremely self sufficient weapon, great for 3 characters who want to focus on or if they just want a backup alternative to Shrivelling.

characters typically run weapons, don't, ergo the disparity in buzz for the two variants of this upgrade.

I would like to argue that Enchanted Blade is no slouch, even compared to it's very impressive cousin. Three characters in-class, Diana Stanley, Jim Culver and Akachi Onyele have 3, with blade in hand they fight at 5, by spending charges they fight at 6 or 7, this is by using the mechanics of the blade all by itself, no support required! With some very light support, a couple skills like Overpower and/or Vicious Blow you can fill a support fighter role killing off a few 2-4 hp threats. It's terrific solo where the self sufficiency is key.

The charge mechanic is very efficient, you basically have a +5 base attack and 4 vicious blows on retainer. You can kill 2 3hp threats in 2 attacks, or 2 4hp threats in 4 attacks. The relatively few charges reinforces the support combat role, you can defend yourself in solo or multiplayer or perhaps spend the entire weapon to beat a boss, but it's a one and done deal with probably no backups. I kid! You still have a copy of Shrivelling right!? Not to mention the infinite number of buffed 1-damage attacks.

Point of reference, a fully charged Enchanted Blade attack is 1 from being exactly as powerful as a Lightning Gun shot, you get 2 shots at the cost 3 resources!

There is a big, obvious downside. characters love their Arcane slots. Jim and Diana don't mind too much, their isn't that impressive anyway, but Akachi likes to play the Rosary game so I doubt sacrificing card slots and XP for a card interests her much.

P.S, the sheer power of a fully charged Enchanted Blade can even make fighting work for a 2 character, obviously it'll require a little bit of card support, Agnes Baker with her cards or a certain brand of Norman Withers can actually be very hard-viable with a sword-fighting build.