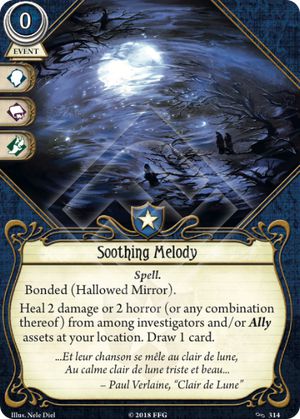 Django · 4428
I believe it's exactly like liquid courage; it heals horror twice, but there's only one effect. Her ability only cares about the number of effects that heal horror, so one effect having multiple instances of healing will still only count as one. — SGPrometheus · 688 8/13/19
Liquid courage says „additional“ so it’s clearly one instance of horror healing. But if melody targets two different assets I think it’s two separate effects, even if they belong to the same investigator. — Django · 4428 8/14/19
Its grey zone, but trying to interpret her ability i would say you only activate her ability once, as there is only one healing effect. But as with chaos tokens when there are multiple token pull her ability can still target multiple assets. Based on this with one investigator 2 assets i would say only 1 resource but 2 different investigators could get 1-1 resource. ("Te healed card's controller gains 1 resource") — vidinufi · 57 3/2/21
3

For 1 action getting a damage healed while costing nothing else is a good possibility for her to sustain her ability. (Ofc playing mirror will take 1 action and 2 resources but after that you can play this card indefinitely)

While taking the "normal" back have other possiblities (Like Jessica Hyde or Leather Coat+Scavenging/Scavenging) if someone goes full parallel this can be worthwhile.

As Heirloom of Hyperborea takes the same accessory slot Relic Hunter is desirable, especially that she can draw 2 cards with each use of this card netting for 1 action cost to heal 1 damage and draw 1 card

vidinufi · 57
I find the draw somewhat excessive given the very thin deck and the draw from Heirloom, parallel Agnes really doesn't lack for draw. Nor does she want too much draw either, as that might mean she'll deck out and draw Dark Memory again! Rather, I see Soothing Melody as one of the very few tools available for the parallel back to soak the damage from her ability. If you have to take Relic Hunter to fully use it though, I'd just spend 2xp more for a copy of Deny (5) for healing. — suika · 8839 3/2/21
That can be mitigated by simply purchasing multiple copies of some great cancellation spells like Deny 5 and Ward 2. Purchasing more than 2 copies in her deck means you start inflating the deck size, which curbs the DM problem. Even without that, playing Mirror throws three Melodies into your deck, so the draw on them is just mitigating their own inclusion, and Heirloom exhausts so you're not really going to be getting more draw out of it most of the time. I think this is an excellent call out for parallel Agnes, and in fact og Agnes with the parallel back might like it a lot as well. You probably do Relic Hunter for it since in either case sanity might be a problem and Rosary is just too efficient of soak and will boost to not run. — StyxTBeuford · 12744 3/2/21
@Styx: heirloom doesn't exhaust. Agreed that you'll want relic hunter for Rosary, but you really want all 3 accessories out in play at the same time, so it'll cost you two copies of Relic Hunter. It'll make for a pretty silly looking 0xp deck that runs 3 accessories at the same time, or you'll have to waste XP buying level 0 cards. I agree that it's a necessary card for parallel back Agnes, but mostly because she doesn't have much better options, not because it's a particularly good. Though OG Agnes if she doesn't run upgraded Heirloom can make better use of it since the slot is less contested. — suika · 8839 3/3/21
Wow I swear I thought it exhausted. Even so, the impact to your draw is unlikely to be that significant since her deck is spell heavy to begin with. At any rate, more draw is typically desirable, even with Dark Memory. — StyxTBeuford · 12744 3/3/21
Also, if you are worried about decking yourself just don't trigger the heirlooms draw for a turn or so while you play a few spells to fill your deck up — NarkasisBroon · 10 3/3/21
Very true, the draw is optional — StyxTBeuford · 12744 3/3/21
Indeed, it just means that the draw effect is wasted, reducing the action efficiency of Soothing Melody somewhat. — suika · 8839 3/4/21
after i used this melody, does it go into my discard pile? — BoomEzreal · 7 8/3/21