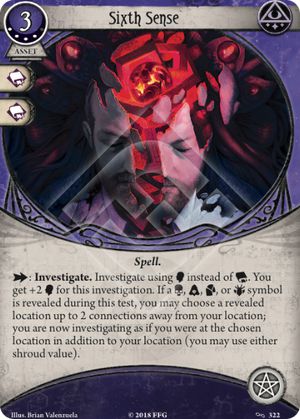 Other people than I should likely weigh in here, but ok, Ill go first!

I thought this was a pretty crap card compared to an upgraded Rite of Seeking, and in many decks that will remain to be true. However, if you are going on a token manipulation deck; a deck that utilizes cards like Olive McBride, or Eldritch Inspiration which give you multiple "If X is revealed during this test" triggers, things start to change dramatically. Already, this card gives the same +2 testing buff as an upgraded rite, but the sneaky ability to trigger the "investigating as if you are the chosen position IN ADDITION to your location" trigger makes this card at least as good as the first upgrade of Rite of Seeking, and the occasional time to trigger it twice, netting you at least 3 clues from 3 locations utilizing the most favorable shroud value. That last point isn't to be understated. When resolving multiple nasty tokens makes for some complicated math if you can't get something like 2 shroud as your base.

Also, the negative ability on rite is just brutal sometimes. Turning it into a plus has the ability to supercharge some builds. For a deck that is going full-on token manipulation, consider this card at even or maybe even better than an upgraded rite. Rite has limited ammo and costs a 2 more to boot. This card really shines in multiplayer, too, as you have other people unlocking locations for you. The drawback, like all combo decks, requires a very picky set of conditions. With Olive only able to trigger once per round, without other token manipulation, you might find Sense rather wanting.

In the end, more stable cards like Rite will likely continue to be the mainstay for most clue/mystics. But don't overlook this very interesting build path.

Being that Father gets superpowers on resolving Eldar symbols, going token manipulation already is a very clutch strategy that gets turbocharged by adding this upgrade path.

While Father benefits FAR more than Jim, being able to "0" out the skulls really allows this card to shine more if Jim is manipulating the bag!

A lot of the problem with setting up a deck manipulation strategy is getting the right cards at the right time. Few base characters in the game can churn through their deck faster than Diana. While you have to dedicate a huge number of slots to exercise this churn and burn, there are likely enough slots to throw-in a few token tricks *stairs longing at Eldritch Inspiration. Of course, if you resolve it twice rather than cancel it, you don't get the same churn and burn ability, and other cards give up more looks at tokens are generally items or assets we would rather not see leave play, which def makes Diana the least suitable to lean heavy into this path, but it is still at least slightly more powerful than other mystics abilities line up for.

All other mages might actually be actively bad to try this path. Though others might have more to say about synergies that I haven't considered as a relatively new player. So don't overlook Sixth Sense, it might just help you see the way forward!

BeCurieUs · 17
This is a great card even if you're not doing token manipulation. By the time you're in position to purchase this card then you're probably deep into a campaign and the bag will be filling up with extra tokens that would trigger the ability. But really that's just an added bonus. The real reason you take this is that it allows a mystic to reliably investigate at whatever shroud level without needing to spend any charges. Mystics are not usually the primary clue-gatherer anyway so don't necessarily need to be grabbing multiple clues in a single action. — Sassenach · 158 10/6/19
That's fair, and I made a mention of that. For me, ammo charge in Rite haven't been to much of an issue, and we have had mad dashes to get clues! I end up always playing a bit of a flex mage with an equal part clue and fight. Perhaps if I REALLY leaned into the fight, though, and just took a card like this to kinda sorta get a clue when needed that might work out well, too!? — BeCurieUs · 17 10/7/19
Durn, beat me to it, I was working on a writeup :P you make lots of fine points. — Tsuruki23 · 2204 10/8/19
When you investigate in both locations, apart from getting to use the shroud from either, do you get a clue from both if you succeed? — AllRoundGoodEgg · 1 5/13/20
it says in addition to which suggests it gets a clue from both locations. I have seen people playing it this way. — Roakana · 1 5/31/20
This card is especially miraculous for the Dream Eaters campaign, since so many locations start in play revealed. — alexs34 · 1 8/15/20
Jacquie Fine running with Olive Mcbride ... just sayin. — dlikos · 26 11/22/20
Just one note...I am pretty sure that they "if a [xyz] token is revealed..." only applies one time, regardless of how many tokens you reveal. That is a general rule afaik, if it said "for each [xyz] token revealed..." then it would work as you're saying. Eldritch Inspiration is a way to duplicate the effect. — thereelaristotle · 14 5/3/21
3

This card is bonkers. I really wish there were more ways to enable this card other than just Olive McBride. Oh well, I guess maybe then it would simply become too strong. Still... I can't unsee the potential of this card in the hands of Jacqueline.

A comparison to using Rite of Seeking (4), assuming no support for either and you always have a location available for an additional investigate, at discovering 18 clues:

Rite of Seeking saves 7 actions, but costs 7 resources, 1 card, and a play more. A naive analysis liquidating every resource and card would into actions put Sixth Sense squarely ahead. Even a slightly less naive analysis — say you spend a play on Emergency Cache and put a copy of Rite of Seeking in play with an Uncage the Soul — still works out to +1 resource +3 cards and +2 plays vs +7 actions, putting Sixth Sense only 1 investigate action behind (assuming you can use the resources and cards to save actions in other ways).

This comparison purely theoretical — there's almost no scenario where you'll need to get 18 clues alone as a mystic. But it's quite common to need to need to get more than the 9 clues that a single copy of Rite of Seeking would get you; which gives Sixth Sense a even larger lead in such a situation...

...at least, until support is factored in. Sixth Sense's support options are just worse:

When compared with Recharge or Twila, no amount of support Sixth Sense can get will keep up with Rite of Seeking's action compression. The caveat is that recharge support costs XP.

suika · 8465
I think you haven’t taken map design into account. A lot of scenarios, especially in TIC, move you around the map at a rapid pace. Being able to use sixth, especially if you can support with eldritch or Jaqueline’s power, can support grabbing victory points off locations without taking the two moves to go there and the two to come back. In TCU, this can be used to reduce painful haunting effects. But if you’re running a deck where you have a lot of blesses and can choose which token you yet, sixth becomes less useful. — MrGoldbee · 1219 1/15/21
I don't see that as a huge advantage — the counterpoint being that the the first time you were at that location, you could have used Rite of Seeking and gotten 3 clues there, and have another gater pick up the last one, instead of having to go back for it/remote clue with Sixth Sense. — suika · 8465 1/15/21
Same with Haunted effects — making fewer tests is also a very good defense against Haunted. — suika · 8465 1/15/21
I think the player count is also important. In 1-2 players, you'll often have 1-2 clues on most locations so you'll never get 3 clues. Or in 4 player you'll often have 1 clue left, so rite is best in 3 player. — Django · 4108 1/15/21
Regarding map design, Sixth gets better when other players reveal locations and you ever move there. It's also great to avoid high shroud locations and it doesn't end your turn with the wrong symbol (or make you waste actoins for the same reason). — Django · 4108 1/15/21
Can I ask a timing question with the new errata? I get that "as if" cards now consider you at that location from start to finish off the event/test. This card only considers you at that other location once you pull a token, at which point you have already taken you're AoO, paid the extra investigate cost, etc. Do you [A] undo those costs and pay the new ones? It feels more correct to [B] keep those locked in and only use the shroud value & clue removal of the new location. Besides, if you want to get really janky [C] it says you're at both locations - paying both costs? I think [B] makes the most sense. — Taevus · 491 6/20/21
You don't retroactively take any new costs. You're only considered at both locations after the symbol is revealed, not when costs were being paid. — suika · 8465 10/7/21