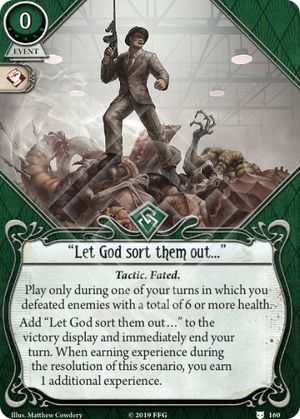 Ah, bonus experience. People will do crazy things from bonus experience. They might drive themselves insane with Arcane Research, risk catastrophe for everybody from Delve Too Deep or show off their death wish with Charon's Obol. However, how possible is it for someone to slay a giant pile of monsters?

The first and most obvious caveat is that you have to be a monster hunter to hope make this work, and that you must also have access to the Rogue pool. While this is a restriction, it's not one of the heavier ones - a number of rogues can be reasonable monster fighters, and a number of non-rogues have enough access that it's not too hard to add one copy of this.

Second, this means you need to be able to kill 6 HP worth of enemies in one turn. Practically speaking, this generally means that you'll be using it after either finishing off a single large enemy, or a pair of decently chunky enemies. This ends up being a more notable restriction. In smaller games, this is only likely to happen in very specific circumstances. In solo, the only way you'll have 6 health worth of monsters in one turn is if you've had a particularly rough set of turns and failed to finish off a monster along the way, both of which mean you're already in a less than ideal position. In two player, it will require appropriate setup, since a teammate might leave a hunter in place and you can try to arrange for it to approach. It's when you hit three investigators that this becomes merely 'unlikely' - it becomes more plausible that you see multiple monsters. Some guardian tools like First Watch or On the Hunt help to find monsters, while Dynamite Blast can often kill them.

(The primary exception to this is if you're about to hit a scenario where you know an elite monster is coming up, and you want to get into a slugging contest with it. In solo games, elite health might end up on a borderline. However, in two or more player games, elite monsters almost always have enough health that you can try to finish one off.)

Third, in scenarios where you can't finish something off, this is only worth a single symbol when committed. It's a very weak commit option, so you'll only want to include it if you're fairly sure you can use it.

Fourth, it's worth noting the card itself is not fast and ends your turn. For most characters, this means that your final action must be spent to actually play the card. This gives you all of two actions to obtain the required kills, unless you're using Leo De Luca or have some other method of obtaining bonus actions. It also means that you won't be managing two copies unless you manage a second unlikely fight on top of the first unlikely one.

Finally, it's worth noting that the net result of your setup and sacrificed card and action, the reward for this is a single XP for one investigator. All of those conditions end up only helping a single person. This usually means that your entire team needed to coordinate to set this up, and the result is that you spend a single action and card to get a single XP for yourself. Is that much effort going to be any more possible than gaining another XP for the entire group for meeting another victory condition? More often than not, I think the group would rather go for another victory point outright.

With so many different restraining conditions, is this worth it? I think one copy could be playable in a few very specific characters or swapped in with Adaptable when you know there's a good elite target coming up. If a fight occurs in the first mission of the campaign, you might also be able to put it in your initial deck and replace it early. Otherwise, this card is too inconsistent to be worth the card slot. XP is valuable, but I don't think a few bonus XP for one investigator is worth permanently forcing your entire group to play awkwardly and the dead draw it would otherwise represent.

(TL;DR: Probably not worth it. Use Adaptable for elite fights or drop it early. Only leave it in if you're an extremely focused monster fighter in a larger player count game.)

Ruduen · 727
Worth noting that it’s a Tactic for Mark/Leo to put on Stick to the Plan. — StyxTBeuford · 12725 2/4/20
There are some non-Elite 6 health baddies in some scenarios. Even in solo, if you're going to face down spheres or vines, you might as well get an extra VP out of it. (Except, of course, for all of the drawbacks. I haven't played this yet. There was a deck I tried to fit it in, but it didn't make the cut.) — Yenreb · 15 2/4/20
Just played return to Dunwich as Leo and TCU as Tony , this card did its job pretty well. In fact It's way more easier to accomplish this using the Guardian. In early scenarios it's hard to deal 6 damages in 2 actions so you may leave some monsters damaged and collect 6 health for the next round . Later you just fire your customized flamethrower , tap your beat cop , then stick to your plan. As a pure fighter in a 4 players game you won't have much to do After you cleared the board , you deserve your little reward . — Tzolkin1065 · 146 2/5/20
I didn't account for Stick to the Plan during my considerations, and it definitely makes the card feel less 'dead' by removing it from the card pool. I'm not sure that it's worth slotting in more than other cards, though. — Ruduen · 727 2/5/20
I don't remember encountering a lot of high HP non-elites, so I'd need to check which particular encounter sets/scenarios they're in. That being said, they probably fall under the same category as elites - 'worth it if you know they're coming up or have adaptable'. Noted, if you're in a campaign where they always pop out, that also makes it much more reasonable to leave it in. And yep, a pure fighter in a 4 player game will have a much easier time triggering this. There's a reason I have that caveat is in the TL;DR. — Ruduen · 727 2/5/20
You have to really already be cleaning out the Victory Points in a scenario for this card to be of any real value, but it sure as heck is fun to try to set up and satisfying to see go off. — Death by Chocolate · 1164 2/6/20
2

Imo the most miscolored card in the game. I think the only reason this is Rogue is because it came in the same cycle as Tony Morgan and they wanted to give Mark Harrigan another off-color Tactic. But this card just screams Guardian. Hell, look at Zoey Samaras! I'm not saying Rogues can't pull it off or that Zoey can't take it; I'm talking about the thematic flavor here.

Additional, if this was Guardian, every class would each have their own way to earn additional XP: Shrewd Analysis (Seeker), Charon's Obol (Rogue), Arcane Research (Mystic) and Déjà Vu (Survivor).

Here's hoping this card will some day receive a Guardian version so I can feel a bit better about this catastrophe of a color mismatch.

Nenananas · 214
Zoey can take it with her 5 splash cards, right? — toastsushi · 62 10/24/20
Yes, exactly — Nenananas · 214 10/24/20
I dunno, I always thought the guardian theme wasn't so much combat as ,like, protection and self-sacrifice. That's why Sister Mary and Carolyn are guardians , right, cause they're protectors and defenders not 'cause they're fighters as such. The Rogues are the mercenaries , the people in it for their own benefit , so it makes intuitive sense to me that they'd be the ones with the "shoot first , ask questions later". And Carolyn and Mary aside, of the other guardians , it doesn't seem like a super great thematic fit for theoretically responsible law enforcement officers Roland and Tommy either. Zoey, Mark and Leo can all take it, which just leaves Nathaniel, and it doesn't really seem on theme entirely for him either. He seems like a guy for one-on-one fights , not cutting a bloody swath through armies. So, I feel like all the guardians it fits can take it, and the ones that can't are the ones where it seems weird thematically.... — bee123 · 24 10/24/20
What bee123 said, Guardians might be the most straight forward combat faction, but it isn't the entirety of their identity and green has always been the 'other gun factio.' Plus the sort of gambling play making the card incentivises is so out of touch with Guardian philosophy that it would be pretty silly there. — Death by Chocolate · 1164 10/24/20
Agreed with DBC, this card is perfectly Rogue. Heavy disagree on it being Guardian in any way. I do agree they should have some XP generator though, but then they are also the faction that can most easily attain victory from enemies. — StyxTBeuford · 12725 10/24/20
Thanks for your thoughts, that makes me feel a bit better about this card — Nenananas · 214 10/25/20
1

I assume, since the experience here seems to be a delayed effect created by playing the card, rather than an effect "while this card is in the victory display", that this provides experience when copied by The Painted World or played again by Double, Double (unlike, in each case, Delve too Deep).

Yenreb · 15
I think you are right about the painted world. But this cant be double double'd. Note that it can only be played during your turn and playing it immediately ends your turn, so the timing point that double double responds to, (after you play this event) is not a valid time to play this event again — NarkasisBroon · 9 1/23/20
On review of Play, Play Action, and Play Restrictions in the rulebook, I think you're right. This suggests Double, Double cannot be used on many events with play restrictions or instructions (only the ones which haven't moved on from the original timing point would be valid). — Yenreb · 15 1/23/20