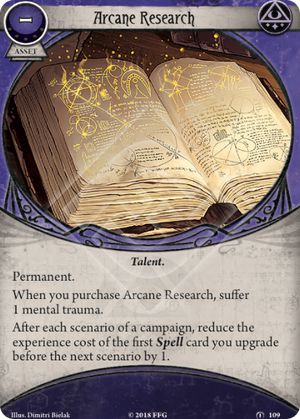 How do I say auto-include in ancient Mesopotamian?

What about two of? Most mystics want this as at least a two of. Some want it as a one of as some mystics cannot play it well with shriveling.

Agnes is probably the best example of this, as the trauma will need to be healed and it will reduce her maximum number of character ability triggers.

But for everyone else. Take at least one or two if you are feeling ballsy.

It IS that good.

Man, this might be my favorite Mystic card. I expect it to get Taboo'd at some point, maybe with that replacement ruling reverted back to the original, because an essentially free 14 XP (because you always take two) is just too easy to take in this game. Even Agnes should consider it despite the anti synergy with her ability- her Mystic/Survivor card pool gives her decent access to horror soak, heal, and prevention (you can always try and infinitely recur St. Hubert's Key with Scavenging for example) which makes the 2 horror she starts with not too big of a problem. But let's check in now and see what spells we can upgrade to as of The Circle Undone wrapping up:

Also in Return to Carcosa we're getting a lower level Suggestion, so look out for that Sefina Rousseau and Akachi Onyele.

So which of these upgrades do you shoot for? Remember that you only get the benefit on the first spell you buy, so a chain of three cards like Shrivelling to Shrivelling 5 is going to take 4 scenarios to reach if you want the full discount. In other words you'll get the benefit 7 times in a standard campaign (though side stories will help you out quite a bit). There's a few up there that stand out to me:

Obviously if you're going to be a fighty Mystic it's a good plan to move through the Shrivelling chain. However you might find you have XP to spare in which case it's probably better to spend the XP for the other upgrade sooner, making you more powerful more quickly (and increasing the liklihood of picking up enemy Victory points later). Instead, I recommend using AR's savings in other areas.

If your name is Diana Stanley or Agnes Baker then I strongly recommend Deny Existence 5. If you plan on running Diana with Dayana then I even more strongly-er recommend it.

Mists of R'lyeh upgrades into a big +3 bonus and an added charge. Particularly good for Jim who is just a bit lower in than anyone else, and also valuable for that one campaign we all know where evasion is super useful.

Ward of Protection 2 is usually considered superior to its overcosted counterpart upgrade Ward of Protection 5, so probably just go up the first step in this chain and then stop. This is especially true in higher count multiplayer, and especially extra super true for Diana in multiplayer. In solo with a less fight capable mystic you could eye 5 instead, or else skip the chain entirely.

Jim should probably always take Sixth Sense 4 since it becomes a very consistent multi clue gathering tool for him, assuming you're building him in the traditional manner of drawing more spooky tokens.

StyxTBeuford · 12473
This card is insane. We played a group of 4 Mystics in Carcosa with 2 copies of Arcane Research each. We ended with 40+ xp worth of cards each at the end of campaign. — Ezhaeu · 38 8/9/19
I only take one with Diana. She can't afford two mental trauma. — Tilted Libra · 16 6/10/20
I took two with Diana in Circle Undone, and did not regret it. It was particular nice with St. Hubert's Key and Desperate skills, which could then be used right at the beginning of a scenario, when she was still comparable week on willpower. — Susumu · 132 8/16/20
4

A fantastic card that'll help propel Mystics up the spell upgrade tree. Spells are expensive, and even though there's just a handful of targets as of the writing of this review, what is available is quite expensive!

All the better if you're playing with Carolyn Fern in your group of Investigators, as she can turn that pain into profit.

This is quite good, despite the risks involved. Take 2!

Each scenario finished with this on the table basically nets you +2 XP for every scenario throughout a campaign. To maximize profits the current ideal path is probably:

That nets you several incredibly powerful cards for just 6 XP, but it will take an entire 8 Scenario Campaign (With New Orleans. Cairo and Venice Thrown in) to make it all the way to this point, for the sake of sheer power in a deck as soon as possible you can choose to forego a few of these triggers to gain a stronger deck earlier, for example spending the 4 XP to finish up Shrivelling before scenario 3.

So, now that some of the most important tools in your deck will basically level themselves up for free, what to do with all the XP you earn?! This is the REAL fun of this card, now all the cool cards like Seal of the Elder Sign, Time Warp and Recharge can make MUCH earlier appearances!

So, when do you take this? On easier difficulties (Standard/Easy) I don't see no reason not to take this, but even so a few Investigators don't quite synergize with this card, Jim Culver for example is the most consistent dude in the game but he is also very very squishy, if you don't see the Jim's Trumpet very very early then you stand to suffer some unwelcome defeats at the hand of the very Shrivelling card's you took Arcane Research to upgrade. Grab Fearless asap to counter the extra horror.

Tsuruki23 · 2017
Agree, I see myself taking 1 or probably 2 of these for all my future Mystic builds. Ward of Protection V is a beast of a card that will probably start seeing a lot more play now that this is here. — CaiusDrewart · 2403 6/21/18
I believe it does not work that way. Upgrading a card cost a minimum of 1 xp, so e.g. Shrivelling(3) -> Shrivelling(5) still cost 1 xp in your example. It makes the second copy of Arcane Research a lot less attractive (but still worth considering). — ak45 · 373 6/27/18
Seems you can reduce upgrade price to 0. As per FAQ ruling: Additionally, the minimum experience cost for upgrading any card is always 1 (see Experience), so you would need to be paying 2 or more experience in order for the discount to apply. Ruling overturned: I will reverse my earlier ruling to suit the language in the FAQ, as this directly contradicts the minimum stated in the Rules Reference. The 1xp minimum does not apply to upgrading cards, and Arcane Research can therefore decrease the xp cost to upgrade a card to 0. — Daerthalus · 8 6/27/18
0

Does anyone know if say - Daisy could take this card and purchase the 3XP version of Shrivelling? Her deckbuilding requirements say Seeker cards level 0-5 and Mystic Cards level 0-2. Arcane research lowers the XP cost of the first spell card you purchase by 1. Does this lower the "level" of the card or just the XP "cost" of the card? These these things different?

Eccegb · 1
Level and XP cost are two distinct things (which is why, say, Wendy can take Skeleton Key), so AR doesn't affect which cards an investigator can get. — TheNameWasTaken · 3 5/31/19
During a campaign, players build a deck before playing the first scenario.will be suffer 1 mental trauma？ — ddk1982 · 1 7/7/20
You get the mental traume immediately as you add the card to your deck. Since this happens before the start of the first game, when you begin the first game you will start with 2 horror — Samirash · 1 7/15/20