Spend 1 charge: Investigate. Investigate using instead of If you succeed, discover 1 additional clue at this location. If a token is revealed during this investigation, you may discover 1 clue at a connecting location or place 1 charge on Eye of Chaos. 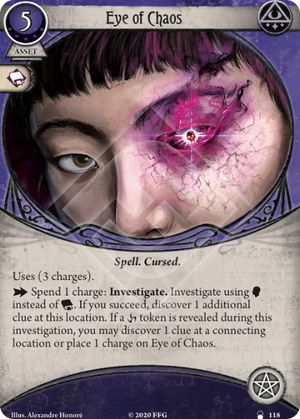 The fourth set of "will replacement" assets, Armageddon, Eye of Chaos and Shroud of Shadows.

The other sets are:

Shrivelling, Rite of Seeking and Mists of R'lyeh.

The similarities between the spells above and this new "cursed" spell set should be plain to see. however, ironically, the "cursed" spells dont have penalties for finding tokens, they are in fact a little bit more expensive, but in-turn they're safer and have bonuses on there!

Well. Safer is perhaps a wrong way to describe it, because playing with is plenty risky in of itself.

In order not to overcomplicate these reviews, I'm assuming you already know how good it is for characters to replace their into tests, pretty much every deck packs in several of these cards, sometimes doubling up for the sake of consistency (a clue focused taking both Rite of Seeking and Clairvoyance for example). This is the way to go for most mystics, with some rare and specific exceptions.

So why would you go for the cursed set?

The cards come hardwired with a higher cost, and a risk -> gains mechanic for tokens, so obviously you'll be plying the risky waters of in a bid for more power. Try to pack in some of the obvious combos to get running on that archetype, Favor of the Moon, generators wherever you can get them (a bit of a rarity in the card lineup, so look to your off-class cards or friends to do that with you).

The unique part of Eye of Chaos to discover 3 clues may or may not be useful (because you're discovering in 2's, so if you're working on a 4 clue location discovering an extra clue is'nt useful), but even then you get a vast amount of charges to work with (assuming you get triggers). Because Eye of Chaos has 3 charges to start with, a risk-averse build can slot Eye of Chaos instead of Rite of Seeking or Clairvoyance even without to trigger it, you pay 1 more resource for effectively the same spell with no downsides.

Dont forget, you need to actually beat the penalties so an even higher baseline of than usual, with Relic Hunter and multiple copies of Holy Rosary and/or Crystal Pendulum to launch your starting point into the stratosphere.

Lastly, remember to pack a bit more resources than usual, you dont want to be too impoverished to play or run your assets!

Is this way ot playing better than the older variants? I dont think so, especially on hard where penalties can be straight up untenable, but if you're able to consistently flex tokens and overcome the penalties you'll certainly be a bit more powerful, but those are big IF's.

Tsuruki23 · 2205
Don't forget that you are also avoiding the possible horror penalty. Is one extra resource a worthwhile investment to avoid an average of perhaps .75 horror? For some investigators, I'd say yes. — GeneralXy · 26 6/30/21
One important part for higher difficulties is that you get the extra effect from a curse token even if you fail the test. So with sealed curse tokens you can guarantee to get a clue from a connected location. That is a 100% certainty. — Mataza · 16 7/20/21
Ability to discover 3 clues is useful even in solo, because the curse-triggered clue is in a connecting location. So you discover 2 clues in your current location and 1 clue in a connecting one which matches how clues are usually distributed. — MindControlMouse · 8 4/4/22
1

If i'm reading this correctly, if you reveal a curse token during this investigation, regardless if it succeeds or fails you can discover a clue at a connecting location or place 1 charge on Eye of Chaos? That's a nice way of mitigating potential curse token downsides, and it makes Eye of Chaos useful even without curse tokens, as unlike the other spell-based searchers it has no downsides for drawing specific kinds of tokens. (Outside of sixth sense, but that's inherently slower without the additional clue clause).

RobSan770 · 2
It has no downsides for drawing specific kinds of tokens, right. But costing 2 resources more for 1 charge less is a considerable downside compared to "Shrivelling" and "Azure Flame". — Susumu · 206 9/24/20
Ouch, forget, what I wrote. It's an Investigate spell. Still, 1 resource more expensive than RoS or "Clairvoiance". I think, this is a fair trade off. — Susumu · 206 9/24/20
Susumu, you can recharge it using [curse] tokens, if you have the right deck/chaos bag composition you can get extra uses out of it. — agentwestmer · 1 9/25/20
Yes, I agree, this looks like an interesting card. My comment was more on your sentence about using it without curse tokens. It has the downside of being more expensive in that case, and I think that balances it out pretty well. It's also likely we will see a share of upgrade cards for this, as well as fight and evade versions. And then it might be even more interesting to go for curses also in other campagns. But right now, we don't know, how rewarding that might be, in particular in multiplayer, when others might curse about you making the bag worse for everybody. — Susumu · 206 9/25/20
More importantly... does it happen everytime a curse token is revealed? I mean the trigger is "if a curse token is revealed". What if I draw three from a pool frontloaded with curse tokens? All other token depended effects speak of "if a symbol is revealed" this explicitly says token. — Skeith · 1756 11/8/20
Answer to an "If' question si ALWAYS only yes/no — Adny · 1 11/9/20
Otherwise it would say "for each curse token revealed", see for example Jim signature weakness "Final Rhapsody", or "Voice of Ra", or "Shards fo the Void"s — Killbray · 3372 12/2/20