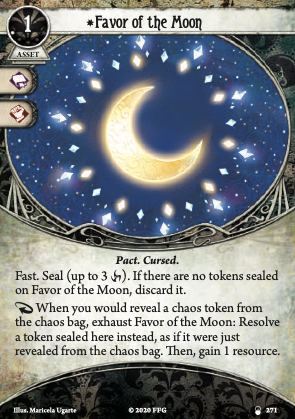 Might be one of the best neutral cards released in a while. Works very well in every class but Guardian, and even then subclasses can make it work.

The best is Mystic - allowing you to trigger curse spells at will. If you draw a curse, you can Moon into the second curse and trigger Curse of Aeons. If you draw a bless, you can use it to trigger Paradoxical Covenant. Furthermore, since it isn't limited to tests, it can make cards like Recharge, Parallel Fates and Astral Travel 100% reliable, which might make recharge worth actually buying. If you drew the curse spells, use Moon to recharge them. If you got other spells, you can use Recharge with Moon to recharge them.

Rather than Rogue or Seeker, I'd say the second best is probably Survivor, because it works really well for teamplay. Get rid of the curses by using them on harmless tests you intend to fail with Take Heart, Drawing Thin and Rabbit's Foot, and get even more of a profit for it. It's less reliable when you need to fail by a certain amount with "Look what I found!" or the similar cards, but still works very well. Stella, Calvin, Patrice and Wendy are probably best for this, but anyone who likes running the failure engine cards loves this. Yorick can constantly recycle it and make a big profit, though he likes Sun just as much or more. Nothing saying he can't run both, at least.

After that, Rogue and Seeker are probably about tied. Seekers like to draw curse tokens for both translations of Cryptic Grimoire and can benefit from them with Blasphemous Covenant. They can tag one extra damage with Gaze of Ouraxsh, too, and even hold off for as many pulls as they want until the seventh to see if they need it. They can also guarantee returning Fey to hand, which could make for a crazy combo in Amanda - for three whole turns, make sure your last test (or mythos phase test if you can guarantee having one, or want to risk it) pulls a curse, return it to your hand from underneath her after the test for a guaranteed three turns of a 5/4/4/4 statline, extra draw that you don't have to put underneath her, and a few resources.

Rogues benefit mostly with their exceptional curse cards. and can get a guaranteed benefit with Skeptic. It can also be used to tag in a third curse or bless for Tristan Botley. In a pinch, Rogues could also use it simply as a way of profiting from harmlessly wiping all the curses from the bag with their Covenant, but this generally doesn't seem worth it. Both classes are also more likely than the others to have a lot of deck cycling, and the ability to draw through their deck into playing the two copies of this once or twice more.

Guardians get a lot less benefit, though subclass users like Tommy, Leo and Mary certainly have a case for them. Roland can't really take enough high levelled seeker cards to benefit too much, but Fey or Gaze plus the extra resources could make it useful.

That said, the worst thing about this card is that it's so good in basically everyone while being unique. Though it would certainly be broken if it wasn't, it does make it difficult to decide who actually takes it in a large group. Multiple people can take it, but if you have Yorick recycling it or a Seeker deck cycling to keep one in play at all times, there's little reason for more than one person to build into it. If it does end up jamming up someone's hand while another person has it in play, it's going to feel bad not being able to play it for up to three turns, and even though its icons are decent, you'll never really want to commit it unless everyone has a copy.

SSW · 187
How does it enable Parallel Fates/Astral Travel? It seals curse tokens, whereas they trigger off the standard symbol tokens. — dr_scitt · 1 5/20/21
They trigger negatively off the standard symbols. If you reveal a curse token they won’t shuffle the deck/damage you. The token would return to the bag though so a mixed result — Dalyn85 · 2 5/28/21
Dexter likes this card - as SSW mentioned, it's great for curse spells if he's using them. However, on top of that it's a fast for 1 resource, so he can effectively turn any asset into a fast asset with his signature ability (a la switchblade (0), but more useful overall). — Bloodw4ke · 43 8/13/21
3

Looking forward to running this on Sister Mary. Using Favor of the Moon in combination with Paradoxical Covenant to basically click when I need to auto succeed a test assuming a blessed token is pulled which is likely with Mary.

This pairs well with Tempt Fate and Rite of Sanctification. Play tempt and you can instantly play sanctification for full 5 blessed turn 1 first action and then favor of the moon to seal the 3 cursed.

Additionally the new .35 Winchester pairs well with her blessed tokens. It is incredibly easy to keep blessed tokens in the bag as Mary. So you can do 3 damage reliably and then just auto succeed on hard enemies. Get a resource to boot. Olive McBride will go a long way to helping you get those blessed tokens.

Now you can add in Shroud of Shadows or the other new spells Armageddon & Eye of Chaos to control when you pull bad cursed tokens for the added effect.

All in all this feels like the glue needed to make a cursed build work very well and tempt fate worth including.

Abbojm01 · 5
Or hey--just seal 3 curses for one resource, and never unlock them. It doesn't even take up an arcane slot, like Dark Ritual. I'd even use this *and* DR to keep the consequences of my heavily curse-laden actions from catching up with me. — Pinchers · 103 1/21/21
Or use this in conjuction with Favor of the Sun when they both are available to guarantee it. — gmmster2345 · 2 2/15/21
0

I have a question about the interaction between Favor of the Moon and Recharge. Since you're revealing the token but not as part of a skill test and Curse tokens have no effect effect outside of skill tests, what happens to the token after you reveal it? Does it get removed from the game, go back the the chaos bag, or just stay under FotM?