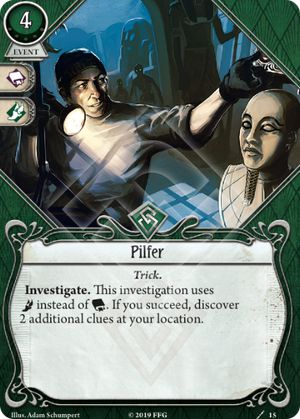 No reviews yet, for this shiny new Wini card? Let me add my thoughts!

Mechcanically, this card is straightforward. Spend one action, 4 resources, and use your agility to look for 3 clues instead of the usual 1. Keep in mind, it's not to be overlooked that this has the Trick attribute, so Rita Young can grab it despite it being a card rather than . Another high-ish agility survivor would be Wendy Adams, who could choose to take this as well.

Inside the Rogue pool, there any many who could take this, and of course it fits nicely with our intended aviatrix, Winifred Habbamock, as she has a base 5 agility.

As far as click compression goes, this card feels in line with the usual suspects like "Look what I found!" (here you get more clues, for arguably the same number of actions), Deduction (quite a bit more cost here, but we're not in the class so things can't be that easy to get extra clues), or Scene of the Crime (again, higher cost and an investigate action instead of a freebie, but a chance at getting 1-2 more clues).

The hard pill to swallow here might be the cost of 4 just to take an Investigate action, which may auto-fail on you. If you're playing games with low player counts, you also might not have a need for 3 clues from one location, which makes this card situational and less valuable. However, if you're like me, and play in many 2-4 player games, this card feels like a solid fit for your high-agility characters, especially if you can synergize with it.

In a four-player game, it's not unlikely for a location to have 8 clues on it, so why not Double or Nothing when you've already placed The Skeleton Key. In that case, you are attaching the key for 1 action and playing this event for 1 action, plus the 7 resources to get both out. That's hefty. But with double or nothing, you're now nearly guaranteed to get 6 clues off the location, which feels like a win. Maybe you even use Gregory Gry to get you some resources back at the same time? Then let's say you only spent 5 resources because you used Sleight of Hand to get the key out? Now we're talking.

Is it a perfect card? No, and I wouldn't throw it in a solo deck most of the time. But in multiplayer, particular with 3-4 players, I think it helps if you're building a flexible rogue who can help grab clues for the team.

This is a card (and its upgrade Pilfer) that truly make sense in a high agility Rogue deck that also uses Chuck Fergus. Being able to make it fast + 2 makes this event pretty phenomenal to clean locations in a 3 person team.

The upgrade in a Winifred Habbamock deck will also often come back to your hand making you clean locations one after the other until you hit an auto-fail.