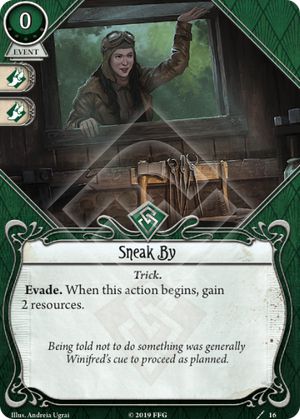 I love this cycle of resource cards. We have Clean Them Out, Burning the Midnight Oil, this card, Voice of Ra, and Take Heart. The big advantage Sneak By has in this cycle is that basic Evade actions are pretty much par for the course for evasion characters. Basic fights are usually bad, and basic investigates are fine in high characters and otherwise need to be supplemented with Lockpicks or Flashlights. It's for this reason that I expect Sneak By to see the most play of all of them, along with Take Heart which is a staple of any one with access to it that expects to fail often, like Preston Fairmont. So Sneak By works especially well for not just evady Rogues, but for those wannabe Rogues in Survivor like Wendy Adams or, especially, Rita Young. Rita's Trick access hasn't done much for her historically, but this is a solid resource generator for anyone who isn't taking Drawing Thin for taboo reasons. You could now run this alongside Easy Mark, or alternatively you replace these with Easy Mark, depending on your curve. Last thing to note is the pips here. Though you're unlikely to commit this, you might if you find yourself flush in resources later on. I personally think this would work really well with Crystallizer of Dreams, just saying.

StyxTBeuford · 12504
One advantage that Burning the Midnight Oil has over it is that you can always investigate, while Sneak By requires an enemy to be around. That being said, E-Cache is better if you weren't already going to investigate, and I do think that a basic evade is significantly better than a basic fight. Definitely agree about Rita, as well. Maybe she'll be able to afford to spam Pilfer (3) with this and Easy Mark. — Zinjanthropus · 165 9/8/20
I love all these events too, especially Clean Them Out, even though I agree it's probably the worst one. Just having that option to gain resources by fighting, just for punching rats or something, is so good for a resource-starved guardian. It's also less of a tempo loss than playing EC since you'd rather be investigating or fighting than taking a resource action. I love these cards. — SGPrometheus · 554 9/8/20
@SGPrometheus: I don't disagree with that, it could even finish a 3-healther or something, anyway. Nathaniel can make it a 2-damage attack, as well, so it's even better for him. — Zinjanthropus · 165 9/8/20
Clean Them Out is one of Nathaniel's bread-and-butter cards; I can't really imagine not running it in him; but I don't know if it would make the cut outside of him. Usually you want to set up before the enemies appear so E Cache is preferable. Anyway, for the card under review - I agree with what's been said. I haven't actually run it yet though. It didn't actually seem useful for Winifred herself; she wanted skills and more skills, not events... but that campaign isn't going too well. She's up to 3 mental trauma out of 3 scenarios (Web of Dreams, Campaign B), so I'm probably doing something wrong. I do like the idea of putting Sneak By on a Crystallizer! — Yenreb · 15 9/8/20
That’s a fair point to make- Sneak By is not a card I’d take in Wini either. She runs a very low curve deck, and she wants wild icons. — StyxTBeuford · 12504 9/8/20