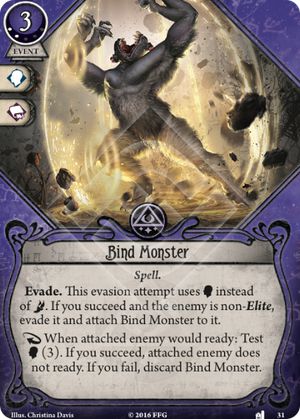 In bad fantasy movies, there’s a powerful demon that gets sealed for thousands of years. Then on page 3 it gets loose. Bind monster doesn’t have that problem, if you use it right. Because there a certain reasons you keep monsters in play instead of sending them to the encounter discard pile.

In four player, you’re going to cycle the encounter deck a few times. That means monsters recur, and ones that have an obnoxious spawn or engage can bother you over and over. If you have a hunch that the encounter discard is going to be shuffled back into the deck, you might not want to kill an enemy this turn, but you don’t want to take a hit.

Relatedly, you might have scenario effects that empower the nearest enemy. In threads of fate, having a cultist with one HP in your location vs having to spawn one across the board could make a full turn a wasted effort, or create unpreventable doom chain, ending this scenario.

Third, some investigators like having an evaded enemy. Trish can get a bonus clue every turn that you keep this card active. The .25 Automatic is a fun combo, or Sneak Attack.

It has some advantages compared to handcuffs: it can target non-humanoids and doesn’t require a set up action to put it into play. But the cuffs are permanent once applied, and are level 0.

MrGoldbee · 1151
I used to think this card was trash, but you're definitely right. There are numerous occasions when it's better to lock down an enemy rather than defeat it. You can lock down a Brood of Yog-sothoth, a poisonous serpent, or basically any weakness. And the Willpower test of 3 isn't too tough when 5-6 willpower is what most Mystics are holding. — LaRoix · 1503 11/5/20
Fun fact, this shows a gug long before any gug enemies actually existed. — SGPrometheus · 594 11/6/20
This is definitely one of those cards where you're guaranteed to pull an auto-fail on the first try, though. — Zinjanthropus · 185 11/10/20
What about this in Horror in high gear? — Meyjoh · 1 3/3/21