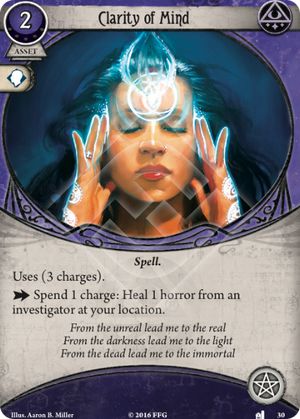 I've used this card (mostly with Agnes) but I'm not sure about it.

At its best, this card is 2 resources + 4 actions (counting the one to play the card) to heal 3 horrors:

What's more, until now, investigators have other ways to repeatably heal themselves without reducing their action count:

banania · 360
I think this is actually a really bad card. Compared to First Aid, it's the same cost, same number of charges, heals horror, but takes up an arcane slot and can't heal damage. Other than 'you can't take First Aid since you can't take guardian cards,' I'm struggling to justify this card over First Aid. To make matters worse, I consider First Aid to be a really bad card anyway, and this is worse than that. — dr00 · 7 3/26/18
2

Why do we pay for insurance? It's not a great feeling, having to pay a continuous fee to be insured against a situation that is unlikely to occur and that you're probably trying to avoid in the first place. And yet, just the knowledge of a safety-net can give us peace of mind when dealing with the unknown, and may even prevent missed opportunities due to a fear of the associated risks.

With that clarity in mind, let's talk about Clarity of Mind. This is an insurance card, and you have to be of the mindset that "things are likely to go south" in order to accept this card into your deck. It does nothing to prevent bad things from happening, only the ability to undo their effects. As such, if you take no horror, then this card is useless. Heck, if you're guaranteed to take your sanity threshold minus one horror, this card is still useless. Thus it's efficacy is tied strictly to your likelihood of crossing that sanity threshold, which for mystics, is unlikely, given all but one have eight sanity or more (the one being Diana Stanley, with a still respectable 7 sanity).

...Except it's not unlikely, because mystics have to contend with one more source of horror than normal, on top of treacheries, enemies, locations and the symbol tokens; themselves. Staples like Shrivelling, Ward of Protection, and Forbidden Knowledge, are all cards that leave one extremely susceptible to one bad encounter card or test, and it can lead to the tragic situation where a large portion of these cards that are in play, in your hand, or in your deck cannot be used without being defeated.

As such, Clarity of Mind is an excellent card for enabling a horror incursion deck. Agnes Baker is the most obvious candidate for such an archetype, but it's also a strong pairing with Arcane Research (especially since you can use the spell discount to get upgraded Clarity of Mind). It's basically an auto-include in a Carolyn Fern deck, and the pair of cards Fight or Flight and Meat Cleaver need cards that can sustain their risky play-style. Finally, Clarity of Mind will insure you against some of the upgraded versions of cards that start dealing or deal additional horror; AKA Shrivelling (5), Scrying (3), and Blinding Light (2).

Lucaxiom · 2948
The Arcane Slot needs to be mentioned here. That makes it incredibly costly for Agnes to run this card because it means she is sacrificing a ton of cluefinding or combat potential. — CaiusDrewart · 2561 10/30/19