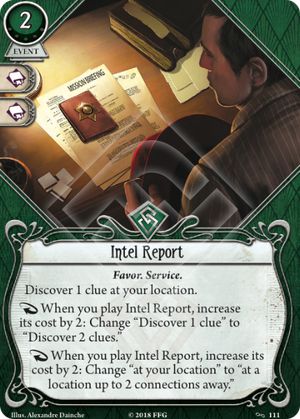 This suit of cards, (Decoy, Small Favor, Intel Report) has its ups and downs, Intel Report is definitely among the ups.

This card is essentially 3 in one:

Grab Intel Report if you're the designated clue dude, if your name is Preston Fairmont, or if you worry that the team might choke on clue focused maps.

Shout out for Intel Report in a Rex Murphy deck.

Tsuruki23 · 2204
An amazing clue grabbing tool that almost all Rogues should take in my opinion. Perhaps the exception is Finn with his 4 intellect. But Jenny and Preston pay for it easily, Sefina can copy it, and even Skids can use it in a pinch. I don't agree with it in Rex though since he's probably going to get more clues just by investigating in the long run anyway. — StyxTBeuford · 12690 7/11/19
True, but when you're the lone clue dude in a duo or trio, and all your friends are too busy or unable to get their clues, you can reach out and do it yourself ;) — Tsuruki23 · 2204 7/12/19
I supposed it's another tool for stationary "Connect the Dots" Rex. Thematically I have no idea what's going on but mechanically I love it. — StyxTBeuford · 12690 7/26/19
4

Are you Preston Fairmont (or maybe Jenny Barnes)? Do you like getting clues? Then this card is for you. Probably too expensive for most other investigators, unless you have more economic support cards in your deck like Hot Streak or Emergency Cache and ways to abuse playing them multiple times (think Sefina Rousseau).

The ability to pay 2 to snipe clues from up to 2 connections away is VERY valuable, as it saves you precious actions needed to move towards that location. The issue is that you'll need to reveal the location to be able to grab said clues, so this becomes more useful in multiplayer. That said, even in solo, being able to pay 2 to grab a clue without fumbling for a test is pretty solid. We've already seen different takes of this in Seeker and Guardian.

Darthcaboose · 231
I've been playing a money Sefina deck and even without extra recursion it was absolutely incredible to grab clues from a high-shroud location from outside that location, avoiding all the bad stuff that the other investigators just fled from. That one action, although expensive, saved a ton of actions and card pips. — pneuma08 · 26 4/29/19
3

The more and more I play with Intel Report, the more I love it. Combined with the Crystallizer of Dreams it can mean basically 3 clues guaranteed in two actions (or 2 clues in 3 actions with movement if you're playing solo, which is solid pacing in solo). The testless nature of the card means you can pretty much always snipe a clue from a high shroud or high risk location. You could even combine this testless clue grab with Narrow Escape if you're engaged with an enemy, then follow that up with an evade on said enemy, and with the Crystallizer that lets you evade at +4, and then investigate at +2. Good stuff.

Fun Crystallizer interactions aside, Intel Report is a staple in my eyes. Even for Finn Edwards it is at worst a drawless Perception, and at best it's a way to compress clues from tough locations, or a way to keep up the tempo when Lockpicks just fails (it happens). Sefina paints more of them, Jenny, Preston, and Tony pay for it very easily, and even the relatively strapped "Skids" O'Toole can use it if he's built for enough cash. Off-class Rogues can even use it to great effect. Wendy Adams can replay it with her amulet, and Leo Anderson might want it too if he's trying to flex, especially with Alice Luxley.

The two locations away from you clause is not the real bright side of the card, I must admit. It is added flexibility but rarely is it worth paying 2 resources to save a move action or even two move actions (often you need to uncover locations by moving into them in the first place). It'll be more useful in multiplayer, surely, where other people can help uncover the map. There are certainly other edge cases for it, but I still have never personally used that function of the card. 4 resources for 2 clues is already a good enough deal in my eyes to play this card. Even in solo where it's usually only able to buy 1 clue for 2 resources due to the nature of solo, it's still worth it because that clue is testless. It's perfect insurance for when you can't afford to fail or when failure is likely.

StyxTBeuford · 12690
This card can go into just about every Rogue deck. It is just that good. I considered it with Leo but went with Interrogate for fun since he had the Fine Clothes. I would have chosen Scene of the Crime since it is cheaper. My Leo didn't really have the economy for this one since you really want the two clues but this is a fantastic card. — TWWaterfalls · 832 1/13/20
Yeah I think it's roughest for Leo, but I think you could justify it. Gregory Gry might help enable it, for example. — StyxTBeuford · 12690 1/13/20
i don't think it's that weird to use the 1-2 connections away ability, even in solo. sometimes you just can't deal with a location when you uncover it, or are forced to move away by enemies or something like that. I sometimes find myself using it in the late game, particularly, when i can't afford to backtrack. — Zinjanthropus · 199 8/19/20
I haven’t found a situation yet where it’s worthwhile, but I’ve definitely heard it used well in multi. — StyxTBeuford · 12690 9/8/20
2

A really important feature of this card, as opposed to its cycle mates, is that it is often practical to play it at the very end of the game when its high cost is not as important. Early on, this card is somewhat specialized, there are situations where it can be very useful but it is very expensive. But a lot of characters tend to build up some extra money near the end of the game when they don't have time to play assets anymore, and this is extra true of rogues who are rich anyway. There are a lot of situations where you can wait till the very end of the game, then suddenly use this card to pick up the clues you need to win, or to earn some extra XP, and ignore the fact that the clues are on difficult to investigate late game locations that you simply don't have time to deal with. This makes this card far more useful than its mates Decoy and Small Favor, because they tend to only be useful in reaction to bad events happening, and are far less likely to be useful in the end game, and this makes it far more difficult to get away from their extremely high cost.