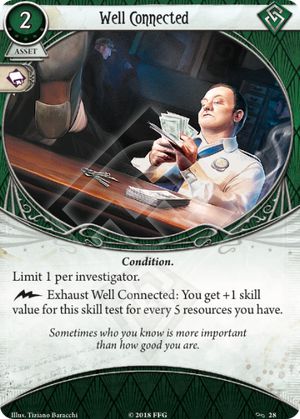 Through Adaptable, I was able to add in Well Connected to my deck after picking up some much needed rogue cards. The combination of this, Sefina Rousseau, her The Painted World cards, and Hot Streak, I was able to able to ultimately stirke up 20+ resources and have a +4 on much needed skill tests. This wouldn't of been able to happen early campaign as Sefina (maybe Jenny Barnes?) just didn't have the resource pool, so the upgraded Hot Streaks were necessary to see this really pay off.

Ulitmatley, once your set up, and you happy to hold on to your resources, then an exhaust for a +1/+2 is solid.

This card is clearly built for Preston Fairmont, and any investigator that wants to make use of Dr. Milan Christopher/Lone Wolf/Burglary.

This card is the core of a very entertaining deck type, the “saving money” deck. There are other cards designed to reward you for saving money (such money talks and cunning) but this one is by far the most impactful. It can give you a very substantial bonus on one test of any type each turn, which makes you a very flexible character. This card is primarily designed for filthy rich characters, I find it very difficult not to include it in any Preston Fairmont deck I make, and it is easy to make a Jenny Barnes deck that makes good use of this as well. It is quite practical for Jenny to be getting +4 on a test in the latter part of a mission, and Preston can do even better, and suddenly you are guaranteed to be able to do at least one really good skill check each turn.

Once you have this card it becomes really tempting to save money, so you can reach that point of easily doing one powerful thing each turn. and while spending 5 money to get a +1 bonus once per turn for the rest of the game is not, in theory, as efficient as other more dedicated cards, it is straightforward to do and the money isn't actually totally consumed, either. At the end of the game, in the last turn or two, you can suddenly burn it off on Intel Report or some other high cost cards.

It can also be useful in wealthy decks (typically Rogue decks) that are not quite so dedicated to saving money. If you only save 10 money the flexible +2 bonus is still quite worthwhile, and even the +1 bonus for saving 5 resources is not bad for a card that costs no XP and doesn't use up a slot, if the money was just going to be sitting around anyway. You are not really going to use this card in a deck with a more ordinary cash flow, though – it is not efficient to spend 7 resources (2 for the card plus 5 to power it) just to get a +1 bonus each turn, when resources are scarce and other cards are competing for those resources.

ChristopherA · 80
I really like using well connected on big money rogues to facilitate huge searches with lucky cigarette case (3) I was regularly getting up to 30 resources and searching like crazy — NarkasisBroon · 1 5/21/21
While it is true, that this is a Preston card, and likely very strong in him, it is not "very difficult" to forfeit it a Preston deck. I played him with "Dark Horse", and this was very strong, too, but would clash with "Well Connected". The nice thing about "Dark Horse" is, that it can be triggered, even if Preston still has money in his "Family Inheritance". — Susumu · 150 5/21/21
I also have only ever actually played Poorston Fairmont. He's an amazing cluever with mariners compasses and dark horse now — NarkasisBroon · 1 5/21/21
I see my phrasing was confusing, I didn't mean it is hard to make a good Preston Fairmont deck without Well-Connected, I meant I like the card so much that I don't want to make a Preston deck without it, it is my favorite card when playing him. — ChristopherA · 80 5/26/21